Ron says his heart attack started right after dialysis treatment with Granuflo at a DaVita Dialysis Center. He is lucky: a number of negligence lawsuits have been filed against DaVita and Fresenius Medical Care by members of families whose loved ones died of a heart attack as a result of using Granuflo and NaturaLyte. 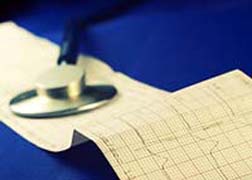 “Even though I have filed a negligence and malpractice complaint against DaVita, I am still going back for dialysis treatment and I’ve been going to this same center for seven years,” says Ron, who has been on dialysis for the past 17 years. Ron is 47 years old and was diagnosed with diabetes when he was a young boy. On top of that he was diagnosed 10 years ago with high blood pressure but says his health issues were under control until he was administered doses of the recalled Granuflo.

“I was driving home from DaVita when I actually had the heart attack but the symptoms started at the center,” Ron explains. “I was feeling really weird; I was sweating and panting and couldn’t catch my breath, so a nurse at DaVita put me on oxygen and put my feet up. I was hooked up to the dialysis machine at the time and was just given a dose of Granuflo.” (Ron has the paperwork from DaVita saying that he was given Granuflo but he doesn’t have the serial numbers, which is an important piece of information his attorney can obtain.)

“My blood pressure was elevated and I got off the machine early,” Ron adds. “They wanted to call an ambulance but I insisted on driving home for some reason, maybe because I have had bad treatments in the past where I needed to be on oxygen and felt OK by the time I got home. And keep in mind I have never had a heart attack - sometimes you don’t know it’s happening.

“And I only live about 10 minutes away from DaVita. I was driving home and praying that I would make it, holding onto the steering wheel and pouring sweat, definitely in distress. I figured if there was anything wrong the ambulance could pick me up at home; obviously, I wasn’t thinking right. As soon as I walked through the door, my mother saw me and called 911. I still didn’t know what happened until my cardiologist told me in the hospital that I had a heart attack and had a stent put in.”

On his attorney’s advice, Ron joined a Fresenius class-action lawsuit alleging that Fresenius knew about Granuflo heart issues back in 2010, but chose not to disclose the information to the FDA or the public until a memo was leaked to the FDA in 2012. Ron considers himself lucky to be alive - many Fresenius wrongful death lawsuits have been filed. For instance, in September 2012, a wrongful death lawsuit was filed against Fresenius on behalf of an Alabama man who died from a heart attack after being treated with the company’s GranuFlo product. According to the lawsuit, GranuFlo side effects caused the man’s heart attack because inadequate warnings were provided about the risks associated with the dialysis treatment.


READ MORE GRANUFLO LEGAL NEWS
More GRANUFLO News
“My attorney told me that Fresenius is hoping to settle out of court but it seems to change by the week as more information is being discovered,” says Ron. “Fresenius failed to warn the public and the medical community of the Granuflo side effects and DaVita pretty much ignored the problem too. So I intend to file another claim against DaVita because they knew about Granuflo. They have been charged with dosing errors and I should never have been given a dose. As far as I know you can file two separate lawsuits because they are two different companies.

“I have three kids, ages five and two, and one just six months old, and I am worried about them because who knows what will happen to me five years from now - I might not be there for them. I want DaVita and Fresnius to pay for my heart attack, I want my share. They did something wrong and they need to pay everyone who suffered because of their negligence.”