Twenty-five passengers and four crew on board the wrecked cruise ship Costa Concordia are still missing according to the Italian Coast Guard, and at least 6 people have died in the maritime accident. 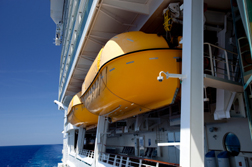 The cruise ship went aground on rocks Friday night, just off Italy’s western coast, and the Captain of the ship, Francesco Schettino, is currently facing questions, with reports that he could face jail time over the incident.

Schettinois currently under arrest and could charges of manslaughter, shipwreck and abandoning a ship when passengers were still on board, according to a report by CNN.com. If found guilty, he could face up to 15 years in prison. Prosecutors are examining the ship's data recorder and expect to have results within days.

Costa Cruises chairman and chief executive Pier Luigi Foschi said they still hope to find survivors. In an emotional press conference Foschi laid the blame for the incident on the Captain’s shoulders, saying he had deviated from the regular course. "The captain decided to change the route and he went into water that he did not know in advance," Foschi said.

The possibility of technical error has reportedly been ruled out by Italian prosecutors, who said the captain was on the bridge at the time and had made a "grave error."

If you or a loved one have suffered losses in this case, please click the link below and your complaint will be sent to a personal injury lawyer who may evaluate your claim at no cost or obligation.
Request Legal Help Now