Danny Moore bought a new home in 1992 and paid a premium for CertainTeed 'top of the line' shingles. "I thought the warranty indicated that they were good for 40 years but they haven't even lasted 15 years," he says.

"I really liked the shape of my roof so I paid extra to the builder for this product," says Moore (not his real name). He explains that they were a deeper cut and heavier than the 30-year shingles—at the time they were called "Independence shingles" and now the same line is called 'Independence shangles'. But more than the name changed in the manufacture of these shingles from the product Moore bought in 1992 until the product being sold today.

"I had a problem with a small leak in August of this year," says Moore. "We had severe wind and rain and my insurance company sent a contractor out to the house. He inspected it and did a temporary repair. A short time later, they sent another contractor out to do a permanent repair and he was going to replace a number of the shingles but instead, suggested that the shingles were too fragile to remove--they were curling and de-granulating. 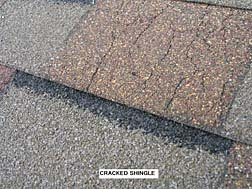 This contractor was aware of CertainTeed's defective shingles. He asked me when I had the roof built and when I told him 1992, he replied that CertainTeed had a problem with shingles during this time and that they had since manufactured the shingles differently and they now come with a lifetime warranty.

He has now taken some of my shingles off the roof and sent them to CertainTeed. I didn't hear back from the company so I called CertainTeed and they basically gave me the run-around. I wasn't too worried at the time because the temporary repair has worked--so far. Also, it is cold here in Michigan and snowing so I probably wouldn't get it fixed until the spring.


READ MORE LEGAL NEWS
More News
Then I looked around on the internet and saw an article on your site regarding a class action lawsuit. It got me thinking about my warranty and perhaps CertainTeed won't do the right thing on my 15-year-old roof that was supposed to last 40 or 50 years. And there is the labor cost to consider' apparently they won't cover any of that.

Now I have looked into the replacement cost and had contractors out here with bids. I know that CertainTeed is going to retaliate and essentially try to get out of their warranty and prorate it. I also heard that CertainTeed knew there was a problem when these shingles were manufactured in the early 1990s but they have since changed the 'recipe'.

I think I will have more success with a lawsuit than getting anything out of CertainTeed."

Posted by
Tim Pierce
on October 16, 2017
11 year old house with new shingles installed (certainteed landmark fiberglass) and they look like someone pulled all the rubber away from the shingle. Fiberglass exposed everywhere. I bought the house from the original owners, but certainteed claims that the builder of the house counts as an owner and due to their really poor warranty, even though there should be 19 more years of warranty on this roof which failed due to their crappy product, they will pay NOTHING. ZERO. NADA. Why even be allowed to claim they have a warranty if they aren't going to even attempt to pay it. This is fraud pure and simple.
Posted by
Allen W Abrahamson
on June 10, 2016
We purchased our home in 2012 and the home was built in 2003. The roof material in CertainTeed Landmark 25 in a Burnt Sienna color. Back in 2012, we had a professional home inspection done and, at the time, the inspector said the roof was in good condition and he expected it to last 25-30 years. Last year, I began noticing small pieces of the shingles breaking off and landing on our deck. This spring, when I went to clean out the gutters, several of them were literally filled to the top with loose granules from the shingles and our shingles are cupped and falling apart. Needless to say, I will attempt to re-coup some of the funds for a complete re-roofing. I will NOT be using CertainTeed (and nor should you!).
Posted by
Joy F
on October 15, 2015
House built in 2006. I purchased home in 2011. Confirmed defective shingles on my bald roof. Factory denied my claim citing that I did not meet the criteria as I was 3 months beyond the five year rule when I purchased the home and therefore have no warranty! Still I have a bald roof from defective shingles. Who owned it when, does not effect the quality of their product and I lost a sale on this home due to the roof. Is there a class action on the CertainTeed Landmark shingle Moire Black? It is criminal what this company is getting away with. I am not installing a new roof and will NOT be using CertainTeed shingles!!!!
Posted by
wally dupuis
on March 5, 2015
I HAVE WENT THRU THE PROCESS OF HIRING SOMEONE TO REMOVE SHINGLES OFF MY ROOF AND SEND THEM TO CERTAINTEED. SENT PICTURES DOCUMENTATION THAT I OWN MY HOUSE. I RECIVED A CHECK TODAY AND THEY REIMBURSED ME FRACTIONS OF WHAT IT WILL TAKE TO PUT A NEW ROOF ON MY HOUSE. DONT KNOW WHAT TO DO NOW. MY ROOF LASTED LESS THAN 10 YEARS. IT WAS A EXPENSIVE ROOF WHEN THE CONTRATOR PUT IT ON. THE SHANGLE WAS SUPPOSED TO LAST 40 YRS. THEY NEVER MADE IT TEN. I WILL CALL CERTAINTEED TOMARRO AND FIND OUT IF THEY WILL COMPENSATE MORE
Posted by
jona crane
on October 27, 2014
We purchased the 25 yr. shingle thinking we was being smart so not to spend another $7,000 for that length of time but we are only in our 12 yr. and the roof is leaking in several places. Sent the shingles to CertainTeed and they admitted that they are defective but only wants to pay $500.00 toward a new roof. Why can these people get anyway with taken advantage of the public. We do not know if the shingles are seconds or what but they need to pay for at least half the cost. Where is the government when you need them to stop these people.
Posted by
Terry Cole
on August 9, 2014
The problem is you do get a small settlement from certainteed but...no where near what a new roof would cost to put on.Contractors and building suppliers should be held responsible also-- they bought the shingles cheap and passed them on to the consumer.My contractor was acting smart and smug he
new exactly what he was doing My husband and I are both
retired we are both in our 70"s I am on 24/7 oxygen I have the
end stages of COPD Our daughter just moved in with us she has diabetes and a bad heart and she was recently a double leg amputee .We need help and need a new roof,

Posted by
RON h
on June 17, 2013
My parents had a new installed 15 or so yrs ago and paid big bucks for the SHANGLES. These were considerably more since they were patterned. They were 30 year shingles an halfway through their life should look pretty darn good? Anyway, the roof looks like the 50th year on a 20 year roof !! most of it is in the gutters and now is leaking since the tarpaper is showing all over !! ( I have photos)
Posted by
Sharon Schlingmann
on January 16, 2012
I am a single woman in my late 50's and am very upset with the Certain Teed shingles on my home. The gutters are filled with pieces, almost like mud ang gook off of the shingles. The shigles are completelty curled up and breaking. I do not have another $5,000 to replace my roof again on shingles that were suppose to last decades. I want them to replace my roof completely not just a small portion as I have heard that is all they will do. Who then is going to pay for my roof?