Maybe They Should Recall the Recall System?


By now, most Americans are familiar with the unprecedented recall of GM vehicles for faulty ignition switches that tend to slip out of “run” into “accessory,” shutting down the engine, power steering, power brakes and airbag systems while a car is in mid-flight. There have been deaths, lawsuits and trials in the court of public opinion that has left General Motors Corp. reeling. Newly minted GM CEO Mary Barra, only on the job since January, is courageously facing the firestorm and vows that every single recalled fault in every GM vehicle will be fixed, 100 percent. 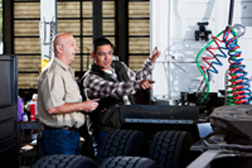 GM is not the only Recall Kid: Toyota recently announced a massive recall. And Chrysler has issued three separate recalls impacting as many as 1.2 million of their venerable Dodge Ram pickups for misaligned steering system tie rods.

Here’s what most don’t know. A lot of those vehicles will never be fixed, in spite of the best effort of the manufacturers to right the wrongs.

According to a revealing expose in the Insurance Journal (4/15/14), about a third of all recalled vehicles will never be repaired. That amounts to about 1 in 7 vehicles currently on the road carrying a repairable defect.

To put that in perspective, according to data compiled by CarFax, that’s 36 million vehicles out there with a defect that could potentially put the driver (and passengers), or other vehicles and their occupants, at risk.

The current firestorm surrounding GM and other manufacturers centers on their alleged misdeeds over recalls, or the lack thereof. However, when they DO issue a recall, not all vehicle owners come to play.

There are various reasons for this. Some couldn’t be bothered. Others avoid taking their vehicles in, out of fear they will be charged for the repair. That’s not true, as dealers affect the repair for the recalled item at no cost to the owner, as the dealer gets reimbursed by the manufacturer issuing the recall in the first place. That said, some owners are afraid the dealer will upsell them on additional services.

The best rate of response is when a vehicle is leased or owned but still under warranty and therefore requiring regular service intervals to keep the warranty in good standing. Dealers will catch a vehicle with a recall and undertake the repair while the vehicle is in for regular service.

At some point, all bets are off

Beyond that, says the Insurance Journal, all bets are off. A vehicle is not required to be under warranty to benefit from a manufacturer-mandated recall. But some owners will switch to private garages when their warranties expire. Owners, who move house, may not receive recall notices at all.

Once a car is sold to a second, third or subsequent owner, a dealer or manufacturer has difficulty tracking it.

Notices of recall are often advertised in major newspapers, and given face time in television and news reports. But not everyone pays attention to the media.

And some just couldn’t be bothered. One professional who drives a recalled GM vehicle and has put 170,000 miles on his car commuting to his job, is not motivated by any fear mongering that stems from the headlines. Intuitively, he still feels safe in his vehicle, even though he could run it into any GM dealer and have the defect fixed for free.

Repair rates vary, depending on the age of the vehicles recalled. The National Highway Traffic Safety Administration (NHTSA), the authority governing and regulating automotive safety, requires manufacturers to file quarterly reports on repair rates for recalls, for a period of 18 months. If repair rates are too low, they can mandate that a manufacturer re-issue the recall.

That’s what Chrysler did in 2012, in an effort to boost repair rates for an existing recall. The manufacturer sent e-mails, made phone calls and did additional mailings of a recall notice that succeeded in boosting the repair rate to 80 percent from 70 percent after 18 months of concerted effort.

Even 70 percent, according to the Insurance Journal report, is a decent rate of repair, historically. The US Government Accountability Office, in a 2011 study of the recall system in the US, found that the completion rate at 18 months following an initial recall averaged 65 percent. But it can be far worse. That same year, manufacturer Hyundai reported a 39 percent response rate. Of 160,904 vehicles recalled for suspension problems, less than half had been repaired after 18 months. Hyundai reported that the owners of 6,852 vehicles could not be reached at all.

Even when a manufacturer knows where the owner lives, and can reach them through mail, e-mail or by phone, manufacturers or dealers don’t have the authority to conscript the vehicle. There is no statute in law that requires an owner - or forces an owner - to get the recalled problem repaired. There are laws that govern the liability and conduct of a manufacturer to properly recall a vehicle model for a known defect. But beyond being asked by the NHTSA to issue a recall a second or third time, the responsibility ends there. A dealer or manufacturer cannot physically come to your house, pick up your vehicle, take it away to be fixed and bring it back without the owner’s consent.

Higher-profile cases, such as the Chrysler recall, the Toyota sticking accelerators of a few years ago or the more recent GM debacle, seem to garner more attention - and the response rates are higher. Repair rates for the Toyota gas pedal recall reached 88 percent, according to available government data.

Beyond that, says George Hoffer, a professor who has studied recall response rates at the University of Richmond in Virginia, consumers tends to let “sleeping dogs lie” - especially if they bought the vehicle used.

“I may not be the first in line, but I’m well aware of the potential problem,” said the assistant programmer from West Suffield, Connecticut. “But I’m the kind of person who doesn’t get scared by the headlines. I can assess the real risk and I’ve driven a lot of miles with no issues. I don’t expect it to happen in the next month.”

The rest of us can only hope.

Posted by
Joyce
on April 27, 2014
Hey: Someone needs to check all of Dodges' cars out. I have a 1996 Dodge Grand Caravan and talk about "air bags" not working. I was hit from behind and pushed into the rear of the car in front of me and my airbag never showed up. This was in 2010, I'd have to check my paperwork for accuracy.

Also, this same Dodge Grand Caravan in 2010 I was driving down the street on my way home, not going fast and my car just stopped just as I turned the corner. I had AAA and they came and found nothing wrong with it. Whereas, I tried starting it up a few times before AAA arrived and it would not start. About ten minutes after AAA arrived he turned the key and it started right up. I was able to drive myself home but the tow truck driver followed me for safety reasons of course.

So it is not just the newer models with hazardous issues.
They need to recall any GM, Dodge between 1996 and 2010 models.