Really, they must be kidding. A class-action lawsuit over Chrysler Dodge Ram Recalls due to Chrysler defective steering was met with vitriol by the automaker in court, as Chrysler lobbied to have all 11 complaints over the so-called “death wobble” dismissed outright. 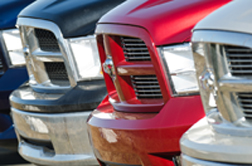 “Plaintiffs’ express warranty claims are premised on the mistaken notion that Chrysler Group promised that their vehicles were free from defects,” the automaker said, in court arguments presented November 13.
“The [warranty] does nothing other than extend Chrysler Group’s obligation to pay the cost of all parts and labor needed to repair any item during the warranty’s…limits. Indeed, courts recognize that a promise to repair actually acts as a warning that the product at issue may fail.”

Owners of 2008 to 2012 Dodge Ram pickups launched a defective products lawsuit against Chrysler due to steering problems which, plaintiffs claim, make the vehicle unstable and unsafe to drive when the wobble occurs. The “death wobble,” as pundits have dubbed it, can have a dramatic impact on a driver’s ability to control the vehicle, especially if it crops up at higher speeds. There has been at least one death, alleged to have been caused by the steering problem.

The problems were traced to tie-rod ball studs that were alleged to be faulty. Chrysler launched a defective steering-system tie-rods recall of Dodge Ram vehicles encompassing the 2008 to 2012 model years. The recall covers the replacement and/or repair of the tie-rod studs and related systems regardless of warranty status, and also provides for reimbursement if owners have bitten the bullet and arranged for the repair on their own.

Part of the plaintiffs’ complaint surrounds the inability to schedule appointments to have the work done. There have been allegations over insufficient parts. And while Chrysler included in its defective automotive recall order reimbursement for repairs arranged or performed by the owner, the automaker is alleged to have failed to offer or provide reimbursement for loss-of-use, or loss-of-value for the affected vehicles.

The Dodge Ram is a popular brand amongst contractors and the agricultural community, who require a tough and reliable truck for their everyday work requirements.

The only way to stop or mitigate the shimmy is to slow down, or pull over and stop. What if the driver is negotiating a major, fast-moving, multi-lane highway where slowing down or stopping is not an option?

The defective products lawsuit is the second amended complaint that was filed this past August by four Dodge Ram owners who have experienced similar instances of “death-wobble,” as seen above, with their vehicles. The complaint holds that the tie-rod ball studs in the affected vehicles are too weak to withstand even normal use. It should be noted that the Dodge Ram brand is marketed as a tough and robust product capable of withstanding the rigors of daily, heavy-duty use.


READ MORE CHRYSLER DODGE RAM RECALLS LEGAL NEWS
More CHRYSLER DODGE RAM RECALLS News
However, the complaint maintains that the ball studs can fracture under even normal use, loosening the tie-rod that comprises an integral part of the Chrysler steering system that helps to hold the wheel firm and properly aligned at higher speeds. A loose tie-rod, as the video shows, can cause excessive shimmy triggered when a wheel encounters a bump in the road or a groove in the pavement. The shimmy, or “death-wobble,” can cause the front end of the vehicle to shake and vibrate excessively, risking the driver’s capacity to control the vehicle and bring it to a complete stop.

In its November 13th rebuttal of the Chrysler Dodge Ram Recalls lawsuit, the defendant listed no fewer than 17 arguments as to why all 11 complaints in the lawsuit don’t hold water. It is unclear if any members of the Chrysler legal team, or principals of the company defending the lawsuit, have ever experienced the “death-wobble” themselves.

The case is Shaun Sater et al. v. Chrysler Group LLC, case number 5:14-cv-00700, in the US District Court for the Central District of California.

Posted by
Nomoredodge
on February 19, 2015
2006 dodge 2500 4x4.
I have new upper and lower ball joints, mopar upgraded steering system with Pitman arm, new bd trac bar, and new steering stabilizer . I have spent so much money on this POS about 2k. I will never ever buy another Chrysler product again!...
Posted by
tracy binner
on December 7, 2014
We own a 1999 dodge Ram quad cab and have had to pay for numerous problems with the steering wobbling over the years. private mechanic has had a hard time fixing this.
Posted by
Mustparts
on December 3, 2014
I have a 2008 Dodge 3500 4x4, I have experienced the Dodge Death Wobble NUMEROUS TIMES. If Dodge (Ram) does not have an issue why is there a replacement part to repair the problem (Mopar part# 52122362AL) which I have installed along with new after market upper and lower control arms. (Top Gun Costumz part # 29140247)This has cured my problem with the Dodge Death Wobble. and I have spent way over $2750 plus my time and frustration.. I pull a 24' enclosed race trailer and is very unsafe at interstates speeds you have to slow down to about 30-25MPH to get the shake to stop. and YES Dodge has a problem and time to address the issue!