It’s one thing to implement a recall when a product is found to be defective. It’s quite another when the recall so ordered is alleged to be more problem than it’s worth. Such are the allegations over the Chrysler Dodge Ram Recalls after owners of the venerable trucks characterize the recall effort as “bungled.” 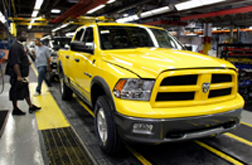 The Dodge Ram is a hallmark of the Dodge brand - a tough truck with a persona of strength and ruggedness. And yet a plethora of owners have complained they lose steering control simply driving down the highway.

The problem is alleged to be defective tie rods and tie rod studs that are too weak to withstand everyday driving conditions - the basis for the defective steering system tie rods recall. Affected Dodge Ram owners, however, note that not only has it been difficult to schedule an appointment to have their trucks repaired, replacement parts were hard to come by and plaintiffs allege replacement parts are no better than the allegedly defective parts.

A defective products class-action lawsuit based out of California stands by allegations that not only are the affected parts - and therefore the affected trucks - defective, but that the defective automotive recall was riddled with deficiencies.

The class action was responding to Chrysler’s attempt, in November of last year, to have the lawsuit dismissed. A month later, in the waning days of 2014, plaintiffs shot back.

“Chrysler’s purported recall process has done more harm than good - effectively lulling consumers into a false sense of safety and leaving them without a proper remedy,” the plaintiffs said in their filing. “The recalls have been grossly inadequate because they failed to properly address all impacted vehicles, and the replacement parts from Chrysler were themselves defective, presenting identical failures.”

Well over 1,000 complaints were filed since the start of 2014, related to the unavailability of parts intended to fulfill the mandate of the defective automotive recall. Last October the National Highway Traffic Safety Administration (NHTSA) opened an investigation into allegations over lack of parts.


READ MORE CHRYSLER DODGE RAM RECALLS LEGAL NEWS
More CHRYSLER DODGE RAM RECALLS News
The plaintiffs also had a response to Chrysler’s claim that any promises of vehicle safety in promotion and advertising are merely an implied warranty or, put another way, “corporate puffery.” Thus, according to the defendants, any claim to a breach of implied warranty remains barred by its express warranty.

The plaintiffs are having none of it, pointing to various statements the company has made in its marketing about the safety of its vehicles as well as the fact that Chrysler’s motto is “Safety first. Safety always.”

Well, maybe not - as ongoing problems with the Chrysler Dodge Ram Recalls appear to show.

The case is Shaun Sater et al. v. Chrysler Group LLC, case number 5:14-cv-00700, in the US District Court for the Central District of California.

Posted by
Carol wickerham
on January 13, 2018
I own a 2003 dodge ram 1500 4wheel drive. A week before Christmas (12/18/2017) I was on my way to work when the driver side axel snapped causing me to lose control and hit a tree. Truck is totaled. I was very lucky to walk away with only bruises and some cuts on my hand.
Posted by
Cody
on October 18, 2015
I own a 2003 Dodge Ram 1500 3.7l v6 5 spd manual 2wd 4 door. Flame red. My wife was driving home from work at a speed of 55mph when the drivers side rear axle snapped clean off right next to the hub assembly. I will provide pictures of the incident upon request. The truck lost control after the axle snapped, causing it to violently roll 4 times and land on its top. My wife has suffered major physical and emotional damages from this accident. The accident occurred 10/15/2015. The vehicle was well maintained and kept. Normal driving and no rough driving. I have seen no recalls for this.
Posted by
Glenda Peoples
on January 27, 2015
Hi I want the whole world to know about this issue with Dodge Ram 1500. In 7/2004 I was involved in an accident that almost killed my mother and I. The "Axle" broke in the truck thus causing the truck to spin and loose control. I contacted Dodge and they sent an investigator to check the truck and I was ignored completely afterwards, I know is been a while but due to the massive recall being done right now I made contact with them again to see if they would provide with the report made by the investigator. My mother has vertigo due to this day, and I'm about to have neck surgery in march. We suffered enough and its time for them to take responsibility for the liability of the product. I'm also attaching complaint from the website Dodge Problems.com
PLEASE READ THE LAST COMMENT ABOUT 'CONTAMINATED FLUID'


Description: THE AXLES ARE LOCATED CONSIDERABLY HIGHER THAT THE ACTUAL FLUID LEVEL. FILLING THE AXLE UNTIL THE FLUID COMES OUT OF THE FILL HOLE WILL OVER FILL THE AXLE, WHICH COULD CAUSE FLUID FOAMING. *MN *TT


Description: CERTAIN 2004 TRUCKS EQUIPPED 8-1/4 IN. OR 9-1/4 IN. REAR AXLES MAY HAVE BEEN BUILT WITH CONTAMINATED AXLE FLUID. RAPID RESPONSE TRANSMITTAL. *TT

Description: CERTAIN 2004 TRUCKS EQUIPPED 8-1/4 IN. OR 9-1/4 IN. REAR AXLES MAY HAVE BEEN BUILT WITH CONTAMINATED AXLE FLUID. RAPID RESPONSE TRANSMITTAL SUPPLEMENT A. *TT