There is little doubt that Fingerhut, a mail-order distributor of products that also has a financing component under the Bluestern Brands umbrella, has its fans. However, various complaints about Fingerhut, including intrusive Fingerhut telephone calls, appear to outweigh the bouquets. 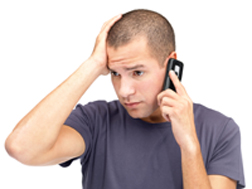 And while Fingerhut credit is designed to provide an option to consumers who may have fallen into a bad credit quagmire over the last few years, the firm’s so-called “FreshStart” appears to be a closed shop. To wit, a positive credit history with Fingerhut is reportedly not shared with the credit industry at large, including reporting agencies. A consumer may have established a stellar credit history with Fingerhut, but no one else will know about it - and you can’t take that to the bank as an example of your financial rebirth.

And then there are the Fingerhut calls. A potential Fingerhut Robocalling Class-Action Lawsuit has been filed in US District Court, Western District of Pennsylvania. The named defendant is Bluestern Brands, doing business as Fingerhut. The allegation is that Fingerhut initiated a series of automated phone calls to the plaintiff’s cell phone without the prior consent of the plaintiff.

There are lots of other complaints out there involving Fingerhut robocalls, or automated calling. One respondent to a chat board noted that Fingerhut had been “calling and harassing [my] wife who has had a massive stroke over $19.17. The total amount for the product is 130.00+ interest! (original emphasis). It is difficult for my wife to speak, yet this person insisted on talking to her and kept her on the phone while he kept making mistakes concerning the issue. She cannot hold a phone at any length of time and speaking is extremely hard for her. We are on Social Security and send our payments per money order, yet if it’s not there on the date they require, they call and harass my wife.”

Another respondent who identifies himself as Don, of Missoula, Montana, wrote on February 7 that he had tried to return an appliance he purchased through Fingerhut after he found the same item at another retailer for $100 less. He waited a month following his request for a copy of his bill, in addition to a return label so he could ship the unwanted item back. After more than 30 days had elapsed, Don had yet to receive any needed paperwork: “just over 50 phone calls at all hours from Fingerhut collections, usually no one on line, silence, then quick busy. The few times someone was on other end, they spoke indistinguishable English and would not listen to my complaint. The calls have come continuously for about a month.” After finally getting through to someone at the corporate headquarters at Fingerhut, Don was told that “I did receive too many calls, but glitches in computer system happens so it is not their fault for plus 50 calls even Sundays at 8 am with no one on the line, as many as 5 in a day.”

It’s a common complaint, and the legal challenge is that Fingerhut calls violate the Telephone Consumer Protection Act.

It should be noted that as of February 21, 2014, Fingerhut was tagged with an “A-Minus” rating with the Better Business Bureau (BBB). Of 1,629 complaints closed with the BBB in the last three years, 640 of those complaints were closed in the past 12 months. Of all the listed complaints, the majority at 766 were centered on problems with a product or service. However, the second-highest level of complaints, numbering 596, was for billing and collection issues. Fingerhut robocalls were not broken out as a separate category.

Ripoff Report, a popular consumer online complaint board, lists an approximate total of 562 reports for Fingerhut.

Meanwhile, a credit-rebuilding program at Fingerhut launched a few years ago and dubbed “Fresh Start” may not be all it seems, according to Gerri Detweiler, the Director of Consumer Education at Credit.com as of October 25, 2012, when she weighed in on the issue.

“FreshStart” was reportedly designed for consumers having had problems with their credit history resulting from the economic downturn of recent years - consumers having trouble qualifying for the regular stream of Fingerhut credit (a denied application for a Fingerhut credit card) and presumably having trouble with other sources of consumer credit due to a bad credit history.

“‘FreshStart,’” noted Detweiler “gives customers a second shot at proving their creditworthiness so they can qualify for Fingerhut’s regular credit cards.

Detweiler acknowledges that the Fingerhut catalogue has a loyal following with a popular basket of products that consumers having credit problems would no longer be able to access without a second chance. Thus it presumably is in Fingerhut’s best interest to find a way around the bad credit histories and keep those consumers shopping.

However, Detweiler makes the point that merchandise is probably overpriced, and “the biggest concern for customers is that they will just focus on the small down payment and monthly payments, and lose track of how much they are really spending. When they do, they’ll pay interest. So instead of buying an item on sale, they are paying more by the time the bill is paid off. The interest rate is 24.99 percent, which is not unusual for a retail card or credit cards for those with bad credit, but it’s high compared to the average credit card rate of about 15 percent.

“And you may not be able to get out of paying at least some interest on purchases. While the marketing materials say purchases can be paid off faster, the terms and conditions warn…”

“Customers who don’t read the offer carefully may miss the fact that they are not building credit with anyone other than Fingerhut when using the ‘FreshStart’ program,” Detweiler writes. “They must pay off purchases under this program on time before graduating to the regular card. It’s not designed to be a way to build credit references with the major credit reporting agencies.”