General Motors is under fire in a national class-action suit for allegedly failing to honor its so-called bumper-to-bumper warranty and replace defective spindle rods. A class-action suit filed against GM says defective spindle rods caused customers to replace the tires on the vehicles, and rendered potentially hundreds of thousands of 2007 and 2008 Chevy Impalas unsafe to drive. 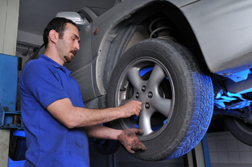 The class-action suit was filed by David Fink from Fink & Associates on behalf of Donna M. Trusky, but there are plenty of other people who have been battling with GM over the same problem and had the same results. It is estimated that there may be close to half a million owners of 2007 and 2008 Chevy Impalas in the US, all of whom would be eligible to join the class.

Even though GM issued a recall in July of 2007, identifying the spindle rods as a problem, the documents say that GM refused to fix the problem when car owners went to the dealerships to ask to have it repaired. Not only did GM dealerships not honor the warranty, many continued to sell the Impalas and even denied there were problems with the cars.

And Trusky is not the only one with early tire wear or having trouble getting GM to deal with the problem, according to information contained in the complaint gathered from a number of Internet posts.

"Purchased new Impala in 2008 and had to replace tires at 35,000 miles," writes another GM customer. "Always rotated, balanced and proper tire pressure," and then adds, "what's up?"

The GM "Bumper to Bumper" Warranty provides a 3-year or 36,000-mile warranty, but the suit alleges the company knew and failed to warn customers about the defective spindle rods, and that it failed to honor its warranty.

The suit asks for damages, injunctive and declaratory relief for all purchases of 2007 and 2008 Impalas.


David Fink is the managing partner of Fink & Associates Law with more than 30 years of litigation experience in courts throughout the state of Michigan. He focuses his practice on complex commercial and class-action litigation in the areas of business disputes, antitrust, consumer fraud, environmental law, intergovernmental disputes, securities fraud, shareholder derivative litigation and construction contract matters.

If you or a loved one have suffered losses in this case, please click the link below and your complaint will be sent to a defective products lawyer who may evaluate your GM LAWSUIT claim at no cost or obligation.
Request Legal Help Now

Posted by
Lorne Drakeley
on April 10, 2015
From: lornedrakeley
Date: April 8, 2015 at 18:40:59 EDT
To: gmprioritycare@gm.com, Subject: 2008 CHEVROLET IMPALA rear tire wear. Case # 71-1461945158
We are having a problem with our 2008 Chevrolet Impala. Our rear tires are wearing out twice as fast as the front tires. I went to Costco yesterday to have my tires rotated, after looking at the rear tires we had to buy new ones because the back tires were worn down to the metal backing. Only one half of the warranty had been used. The tires were Michelin x-Radial DT Michelin Passenger S/T P225/60R16 BW MSPN 17457 tires with an 80,000 mile warranty. The Costco guy thought that something must be wrong with the car. After I got home I checked on the internet as to what could cause this problem and found out that there was a problem with the 2007 and 2008 Chevrolet Impala's. There had been a service bulletin sent out in 2011 to replace the spindle rods on all the 2007 and 2008 Impala's that were sold as police cars to fix this problem that they were having with rear tire wear. I would like to see that service bulletin extended all the other 2007 and 2008 Chevrolet Impala's. This is a major safety problem and people are going to be killed if this problem is not fixed you just don't expect the tires to wear out so fast. We had just finished a trip were we drove freeway speeds up to 75 miles an hour. After seeing our tires I don't know how we keep from having a blow out on the back tires. What are my options with GM. Who else should I talk to about this problem? I checked with the Chevrolet dealer were we bought the car. They are Auburn Chevrolet in Auburn Washington; they are the ones that told me to check with you. They gave me an estimated for fixing the problem and replacement of the parts of about $650.00. Please let me know what GM can do to help. The VIN number for the car is [number] The License number is [number] the mileage on the car is [number]. The case number that you have assigned this defect is 71-1461945158

Posted by
mary harriman
on August 14, 2013
I just replaced my defective tires on my 2008 Chevrolet impala Lt with 21000 miles on it. No mention that the 2008 had problems with worn tires at the dealership. They wanted me to buy a new Chevrolet. I wonder if I should rethink what kind of car to buy.
Posted by
Lawrence Clarke
on February 11, 2013
I purchased a 2008 Impala with 30,000 miles on it. It needed four new tires because of excessive wear. No mention at all by dealer of service bulletin on this issue re police vehicles.
I have since sold car. Could I join the lawsuit?
Posted by
Retah Smith
on October 27, 2012
I purchased a new 2008 Chevrolet Impala LT on 3/11/2008, this was the 3rd Impala that I have owned and have been happy with them until now. I have only 38,000+ miles on my car and have always had the oil changed and tires rotated on a regular basis. I am now told that my rear tires are smooth on the inside of the tire and isn't safe to drive. I have been unknowingly driving it probably for quite sometime in an unsafe condition. I am now faced with having to buy 4 new tires with a cost of $530.00. I am retired and living on a limited income. I purchased this car 4 months before I retired thinking it a good investment and it would last me for a few years. I have been a GM customer for many, many years and am very disappointed that they, GM, doesn't value their customers lives, even though those same customers are the taxpayers that have bailed their company out more than once. From what I have read I am spending $530.00 for nothing because I can expect a repeat of this same problem in the near future.
Posted by
adam hernandez
on June 28, 2012
i bought a 2007 chevy impala and im haveing to replace tires every three month wtf i barely found about the defects these car have last impala im buying at least ford will help you out i think...
Posted by
Jeff Hovey
on June 12, 2012
I just bought a 2007 Impala LTZ. It has 50,000 miles. Very good price and yes, of course new tires. I shall see how the tires whear. Hard to beleive that GM will not recall these vehicles.
Posted by
Arron Smith
on February 29, 2012
I bought a 2007 Siverado in Dec 2011 with 39k on it. In Feb 2011 it is at the Chevy dealership needing a new engine. It only has 44k miles on it now. At 36k miles before I owned it, the engine was rebuilt once before for defective pistons and rings. It has been at the dealership for over three weeks now. When I bought the the truck in Dec and checked the CARFAX, it did not reflect any engine problems.
Posted by
Gertrude Carroll
on December 30, 2011
I purchased a 2008 Impala in May of 2008. I had to replace tires in the fall of 2009 because of excessive wear. I did not know of this problem until this fall. I just had tire rotation and was told I should get alignment checked because of the tire wear.
Normally I get 5 to 7 years wear on tires.