Charlene C. put two Banquet chicken pot pies in the oven for dinner--quick and easy. "In the middle of the night I got sick—my stomach was really cramping and I had diarrhea," she says. "I thought it was just a virus. But I was talking to my friend a while later and said I was going to have a banquet pot pie for dinner. 'Did you hear about that recall a while ago?' she asked. I didn't know of any recall!"

When the recall was announced—October 11, 2007--Charlene was spending most of her time in theology school and she hardly ever watches the news. And no one was talking about a recall; it wasn't part of her daily conversation. She definitely didn't know about a [lawsuit] against ConAgra Foods Inc., the maker of Banquet pot pies. 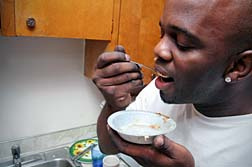 "My friend told me that people were getting sick from them," says Charlene. "I told my friend about how sick I was and she said it was probably from the pot pies. 'You've got to be kidding me,' I said. I got upset just thinking about it; that is probably what happened to me; that is why I got so sick.

"I still had some pies left in my freezer so I looked at the dates on the boxes—about the same time as the recall. I wasn't about to eat them...It makes you wonder, how do you find out about these recalls?

I think that when something like an outbreak of salmonella occurs because of a food product, the manufacturers should send out a formal letter to every household in the US stating what has happened, just like they do with car recalls. I've had flyers in the mail about car parts such as defective tires. Why don't do this with food? It is just as important and people can die from salmonella poisoning; this is going into our bodies.

After my friend and I talked, I went on the internet and told Banquet what happened. I couldn't talk to a human at the company so all I could do was email them and told them I was sick. All I wanted was my money back for the pot pies I had eaten and the six left in my freezer. Their reply: it was too late for me to do anything about it and because I didn't go to a doctor, they couldn't help me. They weren't willing to do anything, even though I had six remaining pot pies. How much more proof did they need?

Those two chicken pot pies I ate really made me sick and I thought I would never stop going to the bathroom. Luckily I didn't need to miss any school but it certainly was an inconvenience. And a waste of money. I haven't bought Banquet pot pies since, and I don't know if I ever will again.

I don't think I will buy them again mainly because of the response that I received. Their customer service is pretty bad—it is like they don't care.


READ MORE LEGAL NEWS
More News
Truly, the way they handle recalls doesn't make any sense—a lot of people don't watch TV or read the newspaper; there has to be a way of contacting these people. It is ridiculous that we have to depend upon the media to find out about these recalls when the people responsible should be informing us.

Even if they sent messages to stores and put up posters, letting people know what recalls are about, that would be better than what they are doing now. Some people, especially senior citizens (and they are the ones who rely on convenience foods such as pot pies more than the general population) have no idea what a recall means.

I'm disappointed in the way [ConAgra] treated their customers. They have been around for a long time and people have supported them by purchasing their products. For them to respond in such a negative way is just bad business.

And I'm not throwing the pies out because I still hope to be reimbursed."