Rite Aid has been hammered by a class action lawsuit filed by current and former assistant managers who take issue with the fact that the chain has reneged on the employees' right to claim overtime pay for hours worked beyond their regular workday or week. In fact, Rite Aid finds itself in legal hot water on a number of fronts. 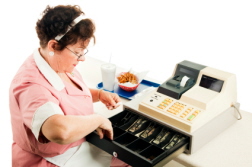 Among other legal challenges is an unlawful discrimination claim filed this month alleging a violation of the Americans with Disabilities Act (ADA).

The civil action, filed against Rite Aid parent Eckerd Corporation in US District Court for the Northern District of Georgia, revolves around plaintiff Fern Strickland, a longtime cashier who worked as a Rite Aid cashier for 18 years. Strickland suffers from arthritis in her knees and was limited in her ability to walk and stand for long periods.

Since 2001 the plaintiff had periodically used a stool while stationed behind the counter, according to the 9/11/10 edition of the US Fed News. Strickland's use of the stool was approved by her employer.

That all changed in January of last year, when a new district manager who was assigned to the Rite Aid location where Strickland worked refused to accommodate the further use of her stool, for reasons that suggested that the individual "did not like the idea" that she used the stool, according to court documents.

The plaintiff was eventually terminated from her job because the district manager was not willing to accommodate Strickland's disability "indefinitely."

The alleged action violates Title I of the ADA. US Fed News reports that the Equal Employment Opportunity Commission (EEOC), acting on behalf of Strickland, failed to reach a voluntary settlement with Rite Aid. The EEOC then filed suit on behalf of Strickland, seeking back wages as well as compensatory and punitive damages, together with injunctive relief in the hope that such violations will be preventable in the future.


READ MORE RITE AID OVERTIME LEGAL NEWS
More RITE AID OVERTIME News
"The ADA protects the employment rights of disabled individuals who can perform their jobs with a reasonable accommodation," said EEOC Regional Attorney Robert K. Dawkins in a statement. "This situation was especially egregious since Ms. Strickland had been successfully accommodated for over seven years before the new manager terminated her. The EEOC is here to vindicate the rights of people victimized by this sort of misconduct."

If you have suffered losses in this case, please send your complaint to a lawyer who will review your possible [Rite Aid Overtime Lawsuit] at no cost or obligation.
Request Legal Help Now