To many Tyler Pipe workers, the company is the source of pipe nightmares that take the form of workplace violations including asbestos exposure and much, much more… 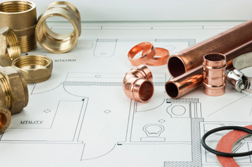 Tyler Pipe, initially called the Tyler Iron and Foundry Company, was born in the remote agricultural town of Tyler, Texas, in 1935. It first produced cast iron soil pipes and fittings for waste removal. By the 1960s, it produced and sold plumbing products made with asbestos, and in 1966, it sold 10 million of its patented TY-SEAL gasket—a pipe-joining product that used asbestos and thereby eliminated the need for molten lead joints—the way soil pipes had been joined for 600 years. From that time on, soil pipes, among many other products, were associated with asbestos.

By the end of the 1970s, Tyler's sales of the TY-SEAL skyrocketed to over 100 million units. And that meant a lot of asbestos in the marketplace. Business for Tyler Pipe was booming; it bought Wade, Inc., a company that sold a full line of plumbing and specialty drainage products, in 1963. At one point the company was also owned by Swan Transportation, a truck transportation provider.

Back to Tyler Pipe: In 1995, Tyler Pipe Industries, as it was now called, was sold for $85 million to McWane Inc., a pipe manufacturer and one of the country's largest privately owned companies, based in Birmingham, Alabama. And McWane is a company convicted of a number of environmental crimes in Utah, Texas and Alabama.

According to the Occupational Safety and Health Administration (OSHA) inspection in 1995, federal inspectors detailed conditions at the plant that included scarred and disfigured workers, puddles of molten metal on the floor, poorly lit work areas, and the presence of asbestos. One report said that "Unfortunately, with little other industry in the area, many workers have no choice but to continue to work at the plant."

The OSHA report said the following:

It was also cited for excessive silica and respirator deficiencies.

Fast forward to 2006. On March 30 of that year, the Tyler Morning Telegraph ran a story titled "Tyler Pipe celebrates 70th anniversary…when families of Tyler Pipe employees will get a chance to see the workplace."

It went on to say the following:

"We want to give the opportunity for employees' families to come in and view the plant and see where they work and see what their jobs are like, and also to show off some of the new equipment that we've put in, some of the major investments that we've made…In addition to employees and their families, the plant has invited other members of the community. [A company spokesperson] said they include stakeholders in Tyler Pipe, vendors, neighbors, retirees and local officials."

A number of federal agencies, including the FBI and the Environmental Protection Agency, were looking for detailed information about the Tyler facility's operation and environmental procedures dating back to the installation of the plant's cupolas (cylindrical furnaces for melting iron) in 1998 and other records back to 1994.

Since McWane bought the operation, it has paid more than $1 million in fines for safety and environmental violations. According to The New York Times, since 1995, McWane has recorded more than 4,600 injuries and accumulated more than 400 safety violations, four times the total of its major competitors combined.

And it will likely face a lot more asbestos litigation.

If you or a loved one have suffered losses in this case, please click the link below and your complaint will be sent to an environmental lawyer who may evaluate your Tyler Pipe claim at no cost or obligation.
Request Legal Help Now

Posted by
Brian A. Henry
on April 18, 2019
We just had a Hydrostatic test done. A leak was found on our cast iron pipe under the house. Repairs must be done before completion of sale of our home. First estimates of repairs due next week. Can you advise.