Vytorin: Yet Another Consumer Complaint


Imagine taking a drug that costs about three times more than similar medications, doesn't work and even does more harm than good. Colin G. doesn't have to imagine: he took Vytorin and is suffering the consequences. He wonders how drug makers could fraudulently market a drug and put people's lives at risk.

"It all started about three years ago," says Colin (not his real name pending a lawsuit). " I had high cholesterol and high blood pressure so I saw a heart doctor. He did all kinds of tests and concluded I had tachycardia —when your heart beats fast for no reason.

"He suggested I take Vytorin. I didn't know anything about it and just went by his word. He also said I would need periodic blood tests because it could affect my liver. 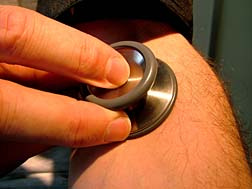 About one month into taking it, all the muscles in my legs hurt; I could hardly walk to the mail box. The doc said some enzyme were high so he lowered my dose and I took Vytorin for several more months. But there was no relief, and the pain was now in my shoulder and legs, especially my calves.

I decided to get off it and control cholesterol myself by eating right. I lowered my cholesterol much more than the Vytorin ever did, but the muscle pain never really went away. I thought it was arthritis coming on--I'm getting in my 40s...

One day I saw my regular doctor because I had a bad cold. I mentioned the pain in my muscles so she gave me a test for autoimmune arthritis. It came back positive so she sent me to a rheumatologist and he did more expensive blood work. He asked if I was on any cholesterol-lowering med. I said not anymore; I had to get off it because it caused so much pain.

The rheumatologist said my pain could be residual effects from Vytorin. Now I have Polymyositis—inflammatory muscle disease. Basically the only cure is massive amounts of steroids. But long term steroid use also has bad side effects.

My wife looked up Vytorin on the internet. There are always warnings on TV about muscle problems but I didn't know it could lead to a disease. Both specialists think it was triggered by taking Vytorin: they didn't come right out and say it, but they both suggested it.

[Merck and Schering-Plough] should have taken their drug off the market for more tests. I have lost all strength in my shoulders and legs and taking all these steroids just to get out of a chair. Vytorin should have been recalled a lot sooner. It is not worth lowering your cholesterol if it is going to cripple you—and it didn't even lower that. I would rather risk high cholesterol than this."