Vytorin: Good for Absolutely Nothing


"My doctor had me on Zetia and Zocor then I switched to Vytorin when it came on the market," says Jeffrey Aaronson. "Every month I spent $200 on this drug and all I got were nasty side effects." He also got two more heart attacks. Aaronson believes that he was duped into taking Vytorin because of the company's fraudulent marketing, even after it knew that Vytorin (and Zocor) had no effect in preventing plaque buildup in the arteries.

Aaronson had a heart attack and was prescribed Zetia and Zocor. But his triglycerides stayed high, which clogged his arteries. "Since I went back to Lipitor and Niaspan, I've had my blood work checked and now my triglyceride count has dropped over 200 points," he says. And that's a good thing. But Aaronson is angry. 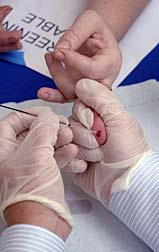 "What really got me was this medication was supposed to prevent heart attacks but I had two while on Vytorin," he says. "I was on it for at least two years and before that, a few years on the other two.

And I don't like the side effects. I put on a lot of weight-- a good 50 lbs--. I had muscle aches and pains and intestinal problems. And I was tired all the time. I was sick for so long that I had forgotten what it was like to feel healthy.

I've gone through three heart attacks altogether so I was sick a lot. As you can imagine, I never knew what feeling good really was like. But I stayed on Vytorin, probably because I had so many different doctors, I kept getting re-evaluated. If this drug did what it should have done, I wouldn't have had the other two heart attacks. The doctors couldn't figure out what was going on. But I certainly feel so much better since I stopped taking it.

I have been duped by this company. I think it is horrible that big business is destroying this country, they just don't care about the little guy and old people, they only care about how much money they can make and the bottom line. And the FDA isn't doing their job. Especially when you rely on medicine and it doesn't work.

You really on these companies to put out decent products and they don't. How come the little guy always has to pay? Every month I spend more than $200 per month on prescription drugs and I also need to use my wife's insurance to cover it.

Vytorin is an expensive drug and it should work. Everyone should be held accountable for their product, especially the drug companies because the doctors cannot do their jobs when they are misinformed. The drug reps push their products with so many samples, they give up millions of dollars in free samples but they aren't really free. We pay, sometimes with our health.

The only reason I went off Vytorin was when I read an article in Newsday that a cardiologist took his mother off it! What am I taking it for? That was enough and I switched.

I hope the government can change the way these drug companies do business. It is time for them to be held accountable for their actions. I am only 51 and haven't worked since 2001. I don't think I will ever be able to go back to work. And the manufacturers of Vytorin knew it didn't work but they kept on marketing the drug. It's shameful."


According to GFK Market Measures, reported they will switch more than 40 percent of their patients currently on Vytorin or Zetia to other therapies over the next few months.

It's all in the advertising. After the trial results were made public, Lipitor's drug maker was offering steep discounts off its average $3-a-pill price tag. A month's supply of the most popular dose of Lipitor costs $81.99 on drugstore.com, while the same amount of Vytorin was $100.99. Another popular cholesterol medicine, Crestor, cost $107.60, while generic Zocor was $19.99.

Barbara Ryan, a pharmaceutical industry analyst at Deutsche Bank, said Pfizer now has an opening to strike back at competing drugs [such as Vytorin] that have been taking a big bite out of Lipitor sales.

"They can come up with another ad that's appealing," she said.