Woman Suspicious of Vytorin's Side Effects


Liz has always harbored suspicions about medications she could not substantiate and sitting at the top of her list is Vytorin, the cholesterol-lowering drug she has taken for five years.

"I had never injured my shoulder before when suddenly, at the end of August 2007, I got this gnawing pain in my left shoulder," says Liz. "I couldn't lift my arm. When I mentioned it to my internist, she sent me for x-rays but they showed no fractures or breaks.

I lived with the pain for awhile, taking the anti-inflammatory medication she had prescribed. I couldn't put pressure on the arm at all and it was like learning to use it again in a different way. 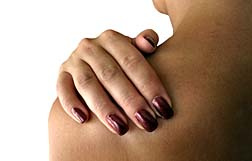 By January, I couldn't stand it anymore so I went to an orthopedist. First, I was given cortisone shots then an MRI, which shows all the ligaments and tendons. And it showed a tear. But when I asked him how the injury could have happened, all he could come up with was 'maybe it's genetic'.

Well, that's not good enough for me. As far as I'm concerned, that kind of explanation is a loophole for doctors. He doesn't know anything about my parents, who are dead. He doesn't know that my father lived to be 92, and my mother to be 87."

Liz underwent physical therapy for several weeks and although her range of activity has improved, she is unable to pull things from behind. While practicing yoga, she can no longer assume the position of reaching back fully and stretching to the floor, nor can she put pressure on the left hand and foot when on all fours. Frustrated by the degeneration of her abilities and any lack of plausible explanation, Liz has decided to take her treatment into her own hands. She has stopped taking Vytorin.

"I had started taking Vytorin in 2002 and I gradually became wary about not being able to substantiate it completely. It's not normal to have muscle aches no one can explain. And my doctor never really commits herself when I ask. Personally, I think something is going on between doctors and medications. They don't want to know if you're having issues with it."

The issue was not whether Vytorin lived up to its claim of lowering cholesterol but the lack of knowledge around possible secondary effects. "I am aware that it's a combination drug," she says, "and it has helped with my cholesterol but it's not the only thing that has helped. I eat well and exercise so I won't say it's a miracle drug. I shouldn't have these aches and pains at 57 if I take care of myself and not take drugs that are not prescribed by the doctor.

I'm not worried about stopping cold. I feel a lot better than when I was taking it. I have less muscle aches."

Despite early positive signs, Liz is aware of the necessity of monitoring the effects of discontinuing a prescribed medication without a doctor's instructions. "I'll be seeing the doctor in two months but for now," she says, "I'm going away and when I get back I will take blood tests and see where they stand with Vytorin. My plan, though, is not to take anything but a pure statin from now on. I think it would be more beneficial but at this moment, I'm weighing the issue."