A year and half after being on Vytorin, Richard had to undergo emergency triple bypass surgery. His doctor had put him on Vytorin in July 2005, around the time the new cholesterol drug became available. But for eight years prior to that Richard had taken Zocor (simvistatin), one of the two drugs actually contained in the Vytorin pill.

While on Zocor he had had no problems whatsoever. Richard suspects, having read the news reports on the marketing of Vytorin, that the medication did not do what it was supposed to do, and that's why he ended up in hospital. 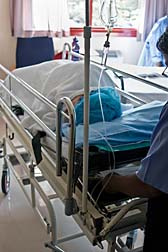 One night in February 2008, Richard wasn't feeling well, so he and his wife went to the local emergency. "They checked me out and sent me back home, saying there was nothing wrong with me," Richard said. "My wife is a nurse, and she was trying to get the doctors to give me a stress test before they sent me home. But the cardiologist on duty that night said there was a million to one chance that I had heart problems. He sent me home saying there was nothing to worry about."

Prior to that fateful night, Richard had had no reason to suspect that he was in danger. His doctor was monitoring his cholesterol levels and they appeared to be under control. He also underwent stress tests on a regular basis. "As long as my cholesterol numbers were within the range they should be I thought that I would be safe from blockages," he said. But when he underwent emergency bypass surgery, the doctors found three blockages in his arteries.

"My doctor told me that Vytorin was a superior drug, and that it would also help prevent my developing full-blown diabetes, as I was at risk for that. I found out later that that was totally false information," Richard said. "But what really caught my attention was that after taking it for a year and a half, I wound up in the hospital. I found that to be a little strange because I thought I was doing ok." And, to make matters worse, Richard now has type 1 - or insulin dependent diabetes.

After his surgery, Richard's doctors lowered the dose of Vytorin. "I was a little bit suspicious of this. I didn't understand why they would lower the dose. But I didn't have any other advice. They told me that my cholesterol was better and I didn't need that much medication. As my wife says, my cholesterol should have been better all along. Why did I need a triple bypass? It doesn't add up," he said.

Interestingly, Richard only recently found out about the misleading marketing around Vytorin —his doctor had not mentioned anything to him. "I saw reports on TV about the fact that Vytorin was being prescribed to people mainly because it was more expensive and more profitable for the drug companies, but it wasn't any better than Zocor on its own. Zocor was already generic when I was taking it, and cost $2.00 per prescription. I was paying $57.00 a month for medication that wasn't working. The Zocor had been working for the past eight to nine years."

Richard and his family are seeking legal help. And Richard wants to share his story. While the warnings didn't come early enough for him, his experience might come in time to help someone else.