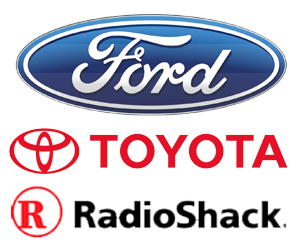 Will Ford Follow in Toyota’s Footsteps? This week, consumers from 14 states filed a federal class action against Ford Motor Co. in connection with alleged defects in Ford’s vehicles causing and failing to prevent the unintended acceleration of those vehicles. Umm, remember that one? Toyota comes to mind…and they settled recently (more on that later).

Here’s the dirt: the plaintiffs contend that Ford vehicles equipped with an electronic throttle control system are vulnerable to sudden unintended acceleration events, and that Ford has admitted that some of its vehicles are in fact prone to such acceleration. Their complaint alleges that the Ford vehicles share a common design defect in lacking adequate fail-safe features, including a reliable brake-over-accelerator (BOA) system (also referred to as a “brake override system”). Such a system is designed to allow a driver to overcome unintended throttle opening by returning the throttle to idle when certain conditions are met, allowing a driver to mitigate unintended acceleration by depressing the brake.

The Ford lawsuit also claims that Ford owners have experienced unacceptable rates of sudden unintended acceleration (SUA), citing a report issued in October 2011 by the U.S. Department of Transportation Inspector General. Plaintiffs allege that Ford should have prevented the SUA incidents by including the brake-over-accelerator system or other fail-safe systems in its vehicles. They maintain that, while Ford began installing a BOA system on some of its North American cars beginning in 2010, the company has failed to remedy, or even warn drivers about the lack of a brake-over-accelerator system on its earlier vehicles.

The cars named in the complaint are:

The potential class action was filed in U.S. District Court for the Southern District of West Virginia in Huntington. The plaintiffs, both individually and on behalf of all other class members, seek compensatory damages for the lost value of their cars, the difference between what they originally paid for their cars versus the actual value of their defective vehicles. Plaintiffs also seek injunctive relief, requesting that Ford fix the problem.

Shack Sacked for Tracking? RadioShack got hit with a potential class action this week…The lawsuit claims the electronics retailer secretly tracks the Internet browsing activities of website visitors and shares this private information with third parties. Well, if so, they’re certainly not the first to do that, and I’m betting they won’t be the last…

Short version, the Radio Shack class action was filed in Missouri, by plaintiff Stephanie Hanson who alleges she visited the RadioShack website numerous times during the past five years but was unaware that the company, together with its website operator, GSI Commerce Solutions Inc., had accessed Adobe Flash Player on her computer. Adobe Flash Player is software that enables the playing of sound and video on websites. By accessing this software, the defendants were able to plant tracking devices known as Location Shared Objects (LSOs) on her computer, the lawsuit claims.

The lawsuit, entitled, Hanson v. RadioShack Corp. et al., Case No. 13-cv-00536, U.S. District Court for the Eastern District of Missouri, seeks to represent a proposed class comprised of all Missouri residents who, within the past five years, had their computers illegally tampered with by RadioShack and GSI. Additionally, the lawsuit is seeking damages for alleged invasion of privacy by unreasonable intrusion, computer tampering, trespassing and more.

It was a very busy week for settlements, and car manufacturers Ford and Toyota led the pack.

As a result, the Toyota lawsuit pursues claims for breach of warranties, unjust enrichment, and violations of various state consumer protection statutes. Toyota denies that it has violated any law, denies that it engaged in any and all wrongdoing, and denies that its ETCS is defective. The parties agreed to resolve these matters before these issues were decided by the Court.

Heads up—this settlement does not involve claims of personal injury or property damage.

If you are class member, you may be entitled to one or more of the following:

Then there’s Ford. They reached a proposed settlement in the pending Ford defective engine class action lawsuit. The background: On April 13, 2011, the Judicial Panel on Multidistrict Litigation created MDL No. 2223, In re: Navistar 6.0L Diesel Engine Products Liability Litigation, and transferred seven lawsuits involving similar claims to the Court for pretrial proceedings. Thirty-two additional lawsuits have since been transferred to the Court. The plaintiffs contend that the 6.0-liter diesel engine installed primarily in 2003 – 2007 heavy-duty Ford trucks and vans contain defects that result in poor performance and expensive repair bills. Plaintiffs assert a variety of legal claims against Ford based on the engine’s design, the marketing of the vehicles, and Ford’s repair practices. Plaintiffs seek to pursue their lawsuits (the “Litigation”) as a class action on behalf of other owners and lessees of model year 2003_2007 non-ambulance Ford vehicles equipped with a 6.0 liter diesel engine (the “Class”).

1. purchased or leased a model year 2003_2007 non-ambulance Ford vehicle in the United States equipped with a 6.0-liter PowerStroke diesel engine; and

2. the vehicle received one or more repairs covered by Ford_s New Vehicle Limited Warranty during its first five years in service or 100,000 miles, whichever came first, to a fuel injector; the EGR valve; the EGR cooler; the oil cooler; or the turbocharger; and

3. you had not, as of November 1, 2012, filed (and not voluntarily dismissed without prejudice) an individual lawsuit based on that engine;

You may be a member of a proposed Settlement Class and entitled to reimbursement for certain engine-related repair costs and deductibles.

If the Court approves the proposed Settlement, Ford will provide Class Members a means of obtaining reimbursement for certain engine-related repair costs and deductibles. All persons (or entities) who agree to accept these benefits will be barred from pursuing individual lawsuits against Ford and others based on the 6.0-liter engines in these vehicles.

For complete information on the pending settlement, your legal rights, and obtaining and filing forms, visit: http://www.dieselsettlement.com/Casedocuments.html