Beauty Blunder! I love this one… A class action lawsuit has been filed alleging that Coty’s Rimmel London Lash Accelerator mascara is misleading to consumers as it falsely claims it enhances eyelash growth. Really? Find this and more in our weekly class action lawsuit wrap, Week Adjourned. 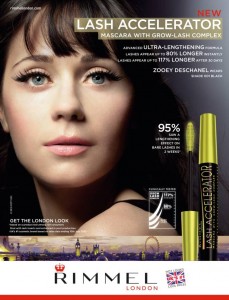 Beauty Blunder! I love this one… A class action lawsuit has been filed alleging that Coty’s Rimmel London Lash Accelerator mascara is misleading to consumers as it falsely claims it enhances eyelash growth. Really?

Filed in federal court in California, the consumer fraud class action lawsuit, entitled Algarin v. Coty Inc., Case No. 12-cv-2868 JAH JMA, claims Coty deceives consumers by advertising that Rimmel London Lash Accelerator mascara with Grow-Lash Complex lengthens eyelashes by 37 percent within one month, and, with ‘regular use,’ increases their number. (The implications, if this is true, are a little worrying).

This is the latest in a rash of lawsuits aimed at wording/false advertising and generally misleading advertising tactics employed by our captains of industry. What I want to know is how much  Rimmel London Lash Accelerator mascara actually ‘accelerated’ Zooey Deschanel’s lashes? And are there unretouched photos somewhere to prove it? Just asking. (Ms. Deschanel, btw, for those who don’t pay much attention to these things, is the Rimmel model for Lash Accelerator).

Back to the lawsuit. Filed by plaintiff Yanira Algarin, the class action states that the mascara does not physically grow or multiply eyelashes and certainly not within the 30-day timeframe advertised. (Have to say I am slightly relieved about that). Instead, the lawsuit states, “As a result of Coty’s deceptive grow lash claim, consumers — including Plaintiff and members of the proposed Class — have purchased a product that does not perform as advertised,” the Rimmel mascara class action lawsuit states. “Moreover, they have paid a price premium for Rimmel Lash Accelerator over other mascaras sold by Coty and its competitors that do not claim to physically grow or multiply eyelashes in 30 days.”

The Rimmel mascara lawsuit is seeking $5 million in damages for thousands of consumers who were allegedly mislead into purchasing Rimmel London Lash Accelerator mascara. It is also asking that Coty immediately stop marketing the mascara as having the ability to lengthen and multiply eyelashes and provide refunds to consumers. Sign me up!

Toys R Us R All Over the News this Week – and not in a good way. News that a $1.1 million settlement was approved by a California judge in a consumer fraud class action lawsuit pending against the toy retailer was reported earlier this week.

Note, this is not a settlement for the Toys R Us bait-and-switch class action lawsuit filed by an angry customer who feels he was duped over the Thanksgiving weekend. That lawsuit alleges Toys “R” US engaged in a bait-and-switch scheme that lured in online shoppers with offers of valuable free gifts but turned out be small or non-existent, and it is alive and well.

The Toys R Us lawsuit that looks as if it may finally be resolved was the one filed by lead plaintiff Laura Maybaum in November 2009 and is entitled Laura Maybaum v. Toys “R” Us Inc., et al., Case No. BC466115.

In it, Maybaum alleged customers who purchased products that offered free gift cards, buy-one-get-one 50 percent-off discounts or other benefits, received less money than the full purchase price on returns. This was in directly violation of a California law, the lawsuit states, which prohibits retailers from giving less than full cash or credit refunds unless a more restrictive policy has been put in place.

Under the Toys “R” Us consumer fraud class action settlement, Class Members will receive a voucher for $10 off a purchase of $50 or more. Class Members include all California consumers who purchased products from Toys “R” Us stores since January 1, 2008 that qualified for a promotion and subsequently returned one or more items. One down. One to go. So far.

If it’s on Facebook – it Must be True… Right? Well, the news is preliminary approval of a $20 million consumer fraud class action lawsuit pending against Facebook was granted this week. The settlement seeks to resolve allegations that Facebook used its ‘users’ names, photos and identities to advertise products on the social network, without those ‘users’ permission. Remember this one?

Facebook has agreed to pay $20 million to settle the class action lawsuit, which will be split amongst charities, attorneys and the 125 million US Facebook users who appeared in Sponsored Stories without their consent. If approved, class members may be eligible to receive up to $10 each.

As part of the settlement, Facebook has also agreed that users will be allowed to exclude themselves from the advertising program.

And on that note—I’ll see you at the bar—as planning for the “deck the halls” thing. Have a great weekend!