After ConAgra voluntarily halted production at the plant that made the allegedly tainted Banquet pot pies back in October, ConAgra spokespeople immediately jumped on the 'proper cooking' bandwagon.

Surprisingly, rather than advise consumers to throw out chicken or turkey pot pies that may have been contaminated with pot pie salmonella, federal officials advised consumers to hang onto them, pending an investigation.

Health officials suspected the Banquet pot pies as the source for 139 cases of salmonella poisoning in 30 states. A ConAgra plant located at Marshall, Missouri was immediately put under the microscope for having manufactured the suspect pot pies, and the company halted production. 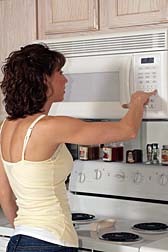 However, ConAgra immediately put the focus on cooking instructions, a mantra they are continuing. In late December the company announced new cooking instructions for microwaving pot pies. Cooking time has been slightly extended, with a greater emphasis on the wattage of the microwave.

As of now, cooking instructions center on microwaves having a minimum of 1100 watts of power. Banquet is recommending pot pies not be cooked at all, in microwaves below that wattage level.

Lost in the shuffle are consumers who still believe that microwavable pot pies are pre-cooked and just need to be heated.

Prior to the salmonella scare, Banquet was recommending a cooking time of four minutes in a microwave with medium-to-high wattage, or six minutes in a microwave with lower power. However, until recently the pot pie packages were being marketed with a large sticker that promoted a cooking time of four minutes alone. While the more detailed cooking instructions on the back of the package addressed the divergent cooking times for different microwaves, forgive the consumer for simply nuking the pot pie for the four minutes suggested on the front of the box, regardless of the microwave they had.

Michigan State University professor Elliot Ryser is a food microbiologist. While he maintains consumers would have little to fear from a pot pie fully-cooked, the fact remains that microwaves heat food unevenly, something which can become problematic for cooking a pot pie.

To further complicate the problem, Banquet did not spell out on the product packaging what a low, medium or high wattage microwave was.

It does now. Cooking instructions are more explicit if not a bit unrealistic given the recommendation that a meat thermometer be used to test doneness.

Still, according to Ryser, who is affiliated with the Michigan State University National Food Safety and Toxicology Center, heating a pot pie uniformly in a microwave takes diligence on the part of the consumer.

The worry is that consumers have little time for diligence as far as microwaves are concerned. Just pop it in, and nuke it. What's the wattage? Dunno. Is that a low, mid, or high-wattage appliance? Dunno either. Test doneness with a meat thermometer.

A meat thermometer? What's that? Do we even have one?

So much attention is been paid to proper cooking, it has deflected attention away from the alleged salmonella contamination in the first place, and where it originated. Salmonella is normally inherent in poultry, but can also be carried by uncooked flour that comes in contact with infected meat. Consumers need to remember that pot pies are not pre-cooked, and require more than simple warming in a microwave.


READ MORE LEGAL NEWS
More News
Perhaps, in addition to more stringent cooking instructions, a public education campaign for busy consumers run off their feet might be in order.

On average, salmonella is responsible for sickening upwards of 40,000 Americans a year in the US.

Six hundred will die. Much like E. coli, salmonella wreaks the most havoc with elderly patients, the infirm or the very young, with weakened immune systems. Most cases present with diarrhea, fever, dehydration, abdominal pain and vomiting.

Food experts have suggested that a good, hard flow of steam escaping from a pot pie is a good indication that it has been heated sufficiently in the microwave to kill any bacteria.

If in doubt, more is better.

Or pack a meat thermometer. And be prepared to use it.