A Rite Aid annual shareholder meeting became the site of a worker's rally, denouncing forced Rite Aid overtime and other practices employees say are "abusive, disrespectful and illegal" according to a June 26 article by the American Federation of Labor (AFL). Although Rite Aid faces allegations of unpaid overtime regarding its assistant managers, it is alleged that union-busting tactics have employees asking shareholders to change how the company is run. 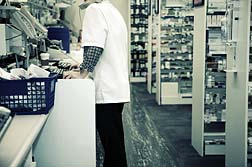 According to the AFL article, Angel Warner, a Rite Aid employee, told Rite Aid's board of directors, executives and shareholders about alleged abusive treatment that began in 2006, after company employees became concerned about mandatory, unscheduled overtime and unsafe working conditions at the company's distribution center in Lancaster, California. Warner said workers voted to work with the Longshore and Warehouse Union (ILWU) but that Rite Aid responded by hiring anti-union consultants.

Warner also alleged that workers at the distribution center faced discipline and/or the loss of their jobs if they left work to care for their children, even if they were only required to stay at work for the forced, mandatory overtime.

"The management abuse started after we complained about unscheduled, mandatory overtime that prevented parents from picking up their kids after work," Warner said, as quoted by the New York City Independent Media Center. The June 27, Independent Media Center article noted that other unions joined Warner at a rally, sponsored by the New York City Central Labor Council, in Times Square.

However, it is not just employees at the Rite Aid distribution center in Lancaster who claim they are being unfairly treated. Rite Aid assistant managers say they have been improperly denied overtime pay for extra hours they work for the pharmacy. Some have written to LawyersandSettlements to say they worked 50 hours a week or more with no overtime pay for those extra 10 hours. They also say that they often performed the same tasks as other hourly employees, including stocking shelves, running the cash register and cleaning the store.

Sarah S. (not her real name) writes, "I worked overtime 50 hours a week or sometimes up to 60 and was not paid for it because I was classified as salary even though I consistently performed [the] work of hourly employees." She further writes that she did not receive proper pay for working holidays.


READ MORE RITE-AID LEGAL NEWS
More RITE-AID News
Although there is an exemption for executive employees when it comes to overtime pay, those employees must be shown to carry regularly carry out management duties in the course of their job. That means that exempt employees must have some authority and discretion in their job. A person cannot be given the title of assistant store manager and then sent to do the same tasks that a regular, hourly employee would normally do and still be exempt from overtime pay. To be exempt from overtime pay, an employee must carry out administrative duties—simply calling someone an administrator is not enough to avoid paying them overtime.

Overtime pay laws can be complicated. They are not as cut and dried as simply being about amount of money earned (although that is a factor) or number of hours worked (also a factor). There are actually a number of factors that go into determining exemption from overtime pay, including duties performed while on the job. This means that just because someone has the title of assistant manager does not automatically mean that person is not eligible for overtime pay.

If you have suffered losses in this case, please send your complaint to a lawyer who will review your possible [Rite-Aid Lawsuit] at no cost or obligation.
Request Legal Help Now