They are the latest people allegedly affected through no fault of their own by the current recession: people who had a Home Equity Line of Credit (HELOC account) at financial institutions that are now freezing or decreasing those HELOC accounts. At least one lawsuit has been filed against SunTrust Bank alleging that the firm decreased a client's SunTrust HELOC without proper justification. However, it appears that clients with a SunTrust Bank HELOC are not the only ones who have seen their HELOC accounts affected. 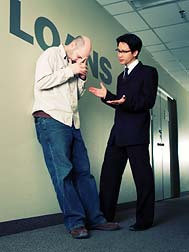 According to an article in the San Jose Mercury News (September 11, 2009) a lawsuit has been filed against JPMorgan Chase alleging that the financial firm unfairly terminated a client's HELOC accounts despite evidence that the clientt could repay money owed on the line of credit. Furthermore, not only was the account terminated, the client, Jeff Schulken, sent in tax documents requested by JPMorgan Chase. When he phoned to ask about his HELOC account, Shulken says he was told the tax request was simply a formality and there was no reason to worry about the HELOC account.

Despite that, the next day he had no available credit.

The Mercury News notes that a lawsuit making similar allegations was filed against Wells Fargo in August, 2009.

Home equity lines of credit allow homeowners to borrow money against the equity in their homes, up to a maximum amount. Clients used their HELOC accounts for a variety of reasons, including counting on it as a safety net. They say that their accounts were decreased or frozen despite evidence that they would have no difficulty paying back the amount owing.


READ MORE SUNTRUST HELOC LEGAL NEWS
More SUNTRUST HELOC News
According to the Federal Reserve Board, a HELOC lender must provide clients with written notice if they have frozen or reduced a HELOC. This letter must be sent no later than three business days following the freeze or reduction and must include information about all changes to the HELOC.

The Federal Reserve recommends that clients call their lender to find out why the HELOC has been frozen or reduced. The most common reasons for changes to a HELOC are that there has been a decline in the value of the borrower's home or that there has been a change in the borrower's financial situation. Calling the lender might help borrowers because, as the Federal Reserve notes, the lender must reinstate credit privileges when the circumstances that permitted the freeze or reduction no longer exist.

In addition to lawsuits against JPMorgan Chase and Wells Fargo, a lawsuit has been filed against SunTrust Bank, alleging the company violated its agreement with clients when it froze or decreased their HELOC accounts.