Much controversy surrounding Thimerosal and Vaccines


Since the 1930s, Thimerosal has been used as a preservative in a wide array of drug products, which includes the vaccines that have protected us from many life threatening diseases. However, the success of Thimerosal as a preservative relies on the ingredient mercury to be successful in what it is designed to do. But in recent years, the FDA has been concerned about the usage of mercury in drug products because of a theoretical potential of neurotoxicity when even the slightest amounts are used and administered into children. Now the FDA is working with the drug companies that manufacture vaccines to have Thimerosal removed from vaccines.

Nine-year-old Hannah Joling is one of those possible cases that autism could be caused by the Thimerosal in vaccines. In 2000, she received five vaccines at the same appointment, which is believed to have aggravated an underlying mitochondrial disorder. When this mitochondrial disorder was activated by the injections, a metabolic dysfunction occurred that manifested and worsened her brain function. She was supposedly developing normally and suddenly began displaying characteristics specific to those of autism. 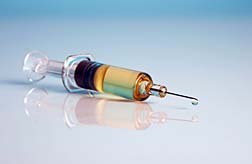 However, there is some conflict regarding when Hannah's symptoms began showing themselves. Some say that she was showing some symptoms at as young as 3 months, while others say she was normal until she received the vaccines at 19 months. Her parents, Dr. Jon Poling who is a neurologist, and her lawyer mother who is also a nurse, have stated that the vaccines are responsible for Hannah's disorder. But the government has not conceded that autism is caused by vaccines. There are no conclusions regarding the role of thimerosal in autism. Furthermore, the government has denied any link between vaccines and the condition.

Although the Joling's case, in which the government settled with them last year, was made private, the Jolings are asking that the documents about the case be unsealed. A U.S. Department of Justice spokesman that represents the government in all of their cases has not allowed any interviews to explain why the records are remaining sealed.

Now there are around 5,000 families wanting compensation from the federal government because they feel that developmental disorders such as autism are due to vaccines. This rise in cases has come about since the Joling case was announced. However, these cases have to have some kind of proof that vaccines were responsible since millions upon millions of people have received vaccines throughout the years and not had any developmental issues.

Nevertheless, with the rise in autism, the number of Supplemental Social Security Income checks going out each month for children with autism has tripled in the past 20 years. In 1960, only 1.8% of children had some sort of health condition that endured for more than three months. This is compared to a rate of 7% in 2004.


READ MORE LEGAL NEWS
Other factors that have been associated with children developing autism is the mother smoking during pregnancy and eating at fast food restaurants frequently. However, the FDA is addressing the issue although a 1999 study showed that there was no evidence that thimerosal caused any harm. The only issue that they saw was that it had a tendency to cause a localized hypersensitivity reaction.

As part of the review, the FDA looked at the amount of mercury an infant may receive from a vaccine under the immunization schedule that is set forth by the government. As of the time of the review, the FDA found that the cumulative exposure was within the acceptable limits. But the FDA does acknowledge that the weight of the infant and the amount of vaccine used could have caused an exposure of cumulative levels of mercury in the first six months that surpassed what is considered to be an acceptable limit.

Currently, more studies need to be conducted to see what the connection is between underlying mitochondrial disorders and mercury.

If you or a loved one has suffered from Autism that you suspect was caused be Vaccination, please contact a lawyer involved in a possible [Thimerosal Vaccine and Autism Lawsuit] to review your case at no cost or obligation.
Request Legal Help Now