Thimerosal, the Polings, and John McCain


With the recent news of the Polings' settlement against the federal government regarding the fact that the vaccine preservative Thimerosal aggravated an underlying mitochondrial condition that caused Hannah Polings' autism, other families are looking to see how they can also receive damages for their children's autism. However, through the many studies, there is no definitive evidence that shows that Thimerosal does indeed cause autism.

In the Polings' case, it was firmly stated that it was a mitochondrial condition that was brought to the surface by the mercury containing preservative and not the vaccine itself. There is no evidence to support it. Studies that have been conducted in the last nine months have shown that there is no relationship between thimerosal and autism or any other neurological disorders at that. One study that was conducted was published in the Archives of General Psychiatry's January issue. It looked at the rates of autism in California after Thimerosal was removed from vaccines. Even with the removal, the autism rates still continued to rise. 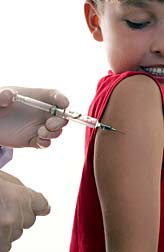 However, it was last week that the government settled with the Polings who, amongst 5,000 other families, sued the government. They claimed that vaccines were responsible for Hannah's development of autism at approximately 19 months of age. After hearing of this verdict, antivaccine groups celebrated and parents have been struggling with the decision of whether or not to vaccinate their children.

But in the case of the Polings, it was due to a condition that had not surfaced in young Hannah that was agitated by the Thimerosal. This is something that is not common in children. However, the government sets aside funds for children who are injured by vaccines. It is the responsibility of health professionals to report the adverse affects of vaccines and then parents can file their claims in federal court. If the judges find that the child was injured because of the vaccine, the child is awarded compensation.

When John McCain was in Texas at a campaign town hall meeting, an autistic boy's mother asked him about the recent report that federal court had conceded that a vaccine may have caused autism in one child. McCain replied to her saying that it is a fact that autism is on the rise, but that it is questionable as to what is causing it. Furthermore, he stated that there's strong evidence that it has something to do with the preservative thimerosal that was used in vaccines and that scientific opinion is divided on the matter. In all reality, the emphasis on the divided scientific opinion was quite overstated since all tests have shown no link.


READ MORE LEGAL NEWS
Again, there is no proof that it was the vaccine itself that contributed to Hannah's autism. The underlying mitochondrial disorder predisposed her to specific deficits that she had in her cellular energy metabolism, which manifested into what is called a regressive encephalopathy, which resembles that of autism. Throughout the court document, the lab results and Hannah's doctors support the diagnosis that her condition is due to a mitochondrial disorder that was aggravated by the preservative. This does not mean the disorder equals autism although it is closely related.

Basically, the mitochondria are a very important part of our cells that generates energy. When the mitochondria fails, the cells go awry and a number of bodily functions can fail. There are a total of 40 mitochondrial disorders that are known. In the court transcript, it states that the vaccinations themselves were not the cause, but that it was plausible that the underlying disease was aggravated by them. With that being the case, the family was entitled to the settlement.

If you or a loved one has suffered from Autism that you suspect was caused be Vaccination, please contact a lawyer involved in a possible [Thimerosal Vaccine and Autism Lawsuit] to review your case at no cost or obligation.
Request Legal Help Now