Since Edward Jenner's Cowpox in the 1800's that was used as protection against smallpox, we have all been given vaccines to prevent some kind of disease. Whether it was the Polio vaccines given to some of our parents and grandparents or Measles, Mumps, and Rubella vaccines given in the past three decades, we have been vaccinated for one reason or another. Nowadays, a child cannot attend public school without a complete vaccination record.

Parents who have tried to fight vaccinations for religious or other reasons have been met with much opposition, regarding their children attending public schools and being susceptible to the diseases that vaccines are made to prevent.

However, there has been speculation within the last decade that vaccines may have a link to autism. The speculation has been there for quite some time and study after study has not revealed the link. But now doctors and scientists have found possible proof that vaccines and autism may go hand-in-hand, if only in some cases. That proof is in 9-year-old Hannah Poling. Because of her, researchers now believe that their speculations have been right the entire time. 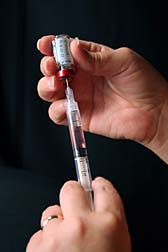 The government has admitted that Hannah's condition may be due to her early vaccinations; therefore they have agreed to pay for her care. This settlement was reached last fall, but has only come to light recently and shows that the government is recognizing the fact that it is a possibility that autism may be caused by vaccines.

The director of Autism United, James Gilmore, made a statement on Friday saying that this settlement between the Polings and the government now gives parents a reason to be cautious when it comes to childhood vaccinations. Mr. Gilmore has also filed a claim alleging that his son is autistic because of the vaccinations he received.

The vaccine ingredient in question in Hannah's case and various others is thimerosal. The controversy surrounding this vaccine preservative has been ongoing for quite some time because of the fact that it contains mercury. Many allege that it is thimerosal that is behind the rise in autism cases. Many of the vaccines Hannah received used thimerosal as a preservative

However, the director of the CDC, Dr. Julie L. Gerberding, has stated that the government has made no statements indicating that vaccines cause autism. She has further stated that she believes the findings of the case are a mischaracterization of the science that is in use today.

In Hannah's case, she was developing normally at the age of 19 months old when she received five vaccinations that protect against nine different diseases. It was just two days later that she refused to walk, developed a fever, and cried to the point she could not be consoled. The following seven months was downhill from there and, in 2001, she was diagnosed as autistic.


READ MORE LEGAL NEWS
Centers for Disease Control, the Institute of Medicine, the World Health Organization, the American Academy of Pediatrics, and the Food and Drug Administration have all said that it is not possible for thimerosal to cause autism since no link has been found in the five major studies that have been conducted. They say that since thimerosal was removed from childhood vaccines in 2001, there has been no impact on the number of autism cases reported each year.

Hannah's case did not prove that thimerosal is the cause of many cases of autism, but it is said that there is no doubt that there are risks associated with vaccines. The risks have been known since the dawn of these disease preventing drugs and the risks will always be there.

If a loved one has suffered from Autism that you suspect was caused by vaccination, please contact a lawyer involved in a possible [Thimerosal Vaccine Lawsuit] to review your case at no cost or obligation.
Request Legal Help Now