They proved endearing to some, downright obnoxious to others. But the most annoying aspect of the allegedly fraudulent Vytorin TV ads featuring actors dressed to look like food, was that the ads promised the moon, while the product itself appears to have delivered little more than a lump of coal.

Vytorin is the combination of Zetia, a cholesterol-fighting drug manufactured by Merck Pharmaceuticals and Zocor, a drug in the statin family manufactured by Schering-Plough. When patent protection for Zocor expired, the two manufacturers entered into an agreement governing their respective drugs and came up with Vytorin. 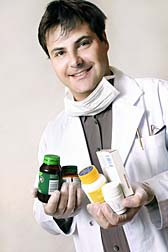 Zetia, it turns out, is usually taken in combination with a statin (such as Zocor), in an effort to maximize the effectiveness of the cholesterol-fighting properties of both drugs. As Zetia and statins like Zocor fight cholesterol in different ways, it was long believed that doubling up would be even more of a good thing.

Merck and Schering-Plough took that philosophy one step further and came up with Vytorin, which combined the two into one distinct brand.

However, was this combination effective? No one knew for sure, although every new medication is based on a relatively small clinical trial that provides the necessary data for the US Food and Drug Administration (FDA) to approve a drug for market.

Greater weight was being put on the ENHANCE trial, which the manufacturers had reportedly begun in 2002 and concluded in 2006. However the manufacturers, citing various reasons, delayed the release of study results by about two years.

The delay itself might give pause to wonder about the results of the study. However, an alleged attempt by Merck and Schering-Plough to alter the end point of the trial after the trial had concluded, provides further suspicion that the manufacturers were displeased, if not alarmed with the outcome of the Enhance study.

When the trial results were finally released in mid-January of this year, the resulting furor seemed to crystallize the ongoing appearance that something was terribly wrong.

Why else would a manufacturer drag its heals in the release of clinical data from a statistically-relevant trial for two years?

Because, in a nutshell, Vytorin was shown not to work. While Vytorin served to reduce actual cholesterol levels, it was shown to be no more effective than other drugs that were far less expensive, and less controversial. What's more, Vytorin did little to alter the levels of heart-busting plaque in the arteries—and in some cases, appeared to be responsible for increasing plaque build-up.

Zetia, by default, seems to be the black sheep. Statins, such as the Zocor Zetia is combined with to make Vytorin, have long proved their worth in lowering cholesterol and, in so doing, reducing the risk of heart attack and stroke. Zetia, on the other hand, was branded with a black mark even before it was approved in 2002, when an FDA researcher recommended it not be used in combination with statins.

The FDA approved Zetia anyway. Zetia was also approved for use with Zocor, in Vytorin.

And now comes research that suggests Vytorin—or, in other words Zetia in combination with statins, doesn't work. Statins have been shown to work on their own, but statins with Zetia do not.

Thus, Zetia appears to be the culprit, and the reason why Vytorin is an apparent dud.

Interviewed during an Eye to Eye segment with Katie Couric on CBS, noted cardiologist Dr. Steven Nissen of the Cleveland Clinic said as much."In all historical studiers, the more you lowered cholesterol, the better the outcome. In this case, it simply didn't work.

"Adding Zetia to Zocor, which is what makes the drug Vytorin, had no benefits whatsoever at slowing the progression of plague build-up in the carotid arteries of the neck," Dr. Nissen said.

In response to a question from Couric pertaining to the suggestion that Vytorin actually led to plaque build up, Dr. Nissen noted that the differences were not statistically significant, but the trend was going in the wrong direction. "In addition, there were actually a few more cardiovascular events; heart attacks and strokes, adding...

"We see no evidence of any benefit of this very heavily advertised, very widely used cholesterol medication, Vytorin."

Meantime, while apparently sitting on this information for two years, the manufacturers of Vytorin were continuing to aggressively market the drug via the now-legendary television commercials that featured actors dressed as, posed and made to look like cholesterol-laden foods, in split-screen ads.

The marketing efforts focused on the cholesterol-lowering attributes of Vytorin that, indeed, was shown to lower cholesterol more effectively than Zocor alone. However, as the medical community has now widely suggested, to have cholesterol levels lowered so dramatically and not deliver a health benefit puts the efficacy of the Vytorin into question.

Representatives John Dingell and Bart Stupak, Michigan Democrats, requested documents from the FDA and the drug manufacturers pertaining to the marketing campaign for Vytorin.

"Given the frequency of Vytorin advertisements, it concerns us that a study showing that Vytorin provides no increased benefit was not issued for nearly two years while direct-to- consumer advertisements were carried on the airwaves," Dingell and Stupak said in a letter to the chief executive officers of Merck and Schering Plough.

"This situation raises concerns that the drug companies and their advertisement agencies profited at the significant expense of patients' health."

According to Bloomberg, Vytorin represents a whopping 70 percent of Schering-Plough's profit, with Zocor coming in at 22 per cent for Merck. It has been reported that the two drugs enjoyed global sales of $5 billion last year. According to Nielsen Monitor-Plus, the companies spent $200 million advertising Zetia and Vytorin directly to consumers. Dr. Steven Nissen told CBS' Katie Couric that nearly a million prescriptions were being written for the drugs each week, just before the details of the Enhance study were made public.

The bottom line appears to be that for two years, manufacturers allegedly knew that their product did not deliver any tangible benefit—and yet they continued to advertise the drug heavily. An investigation is being launched to determine if that advertising was, indeed, patently fraudulent. In the meantime, consumers were persuaded to spend many times more for a drug that was known not to work, rather than the cheaper statin drug that has many times over proven its benefit.

Do the math. How much more did you spend over those two years for a drug that is now being spoken of in terms of having no identifiable benefit?

That money should be in your pocket, rather than the deep pockets of Merck and Schering-Plough.

If you or a loved one have used Vytorin over a generic drug because of Vytorin advertising claims, please contact a lawyer involved in a possible [Vytorin Lawsuit] to review your case at no cost or obligation.
Request Legal Help Now