On February 15, 2008 a House Committee suggested that Merck & Co. and Schering-Plough Corp., the manufacturers of Vytorin, were aware of the negative ENHANCE study results nine months before it was made public, yet the giant drug companies continued to market the popular heart drug/ cholesterol medicine. According to the study, Vytorin had little effect on the buildup of plaque in the arteries, which can lead to heart attack and stroke. In so doing, the drug companies have allegedly committed fraudulent marketing and endangered people's lives.

Vytorin has now become the poster drug for scientific fraud, and it is plastered over the internet, from a video clip on YouTube to rants on numerous blogs. The YouTube video points out that the advertisements on TV are out of the FDA's jurisdiction, so Vytorin can still be touted as a miracle drug, even after clinical trials indicate that it should be taken off the market. 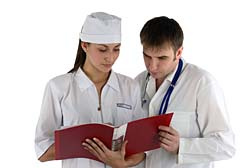 According to pharmawatchdog, a House Committee made public a number of anonymous emails posted on an industry chat site, suggesting "company insiders" had knowledge before release of the preliminary data that Vytorin had fared no better in the trial than Zocor (simvastatin) alone for familial hypercholesterolemia--a disorder that causes severe elevations in total cholesterol. (Vytorin is a combination of two drugs —Zocor, made by Merck, and Zetia, made by Schering-Plough.)

The emails on a Web site called cafepharma.com, said the committee included the following posts:

April 13, 2007 "Have a buddy at [Schering-Plough Research Institute]. He says the study is a bust. Adding Zetia to already maxed-out statin is useless."

Sept. 10, 2007 "One of my docs is a very good friend of the PI overseas. I'm told that the study IS negative in that there is absolutely no difference in carotid IMT between simva [Zocor] 80+placebo vs. simva 80+Zetia 10."

Nov. 14, 2007 "Word of mouth from investigators involved in running the trial is that it's a negative study. We and Merck both talked up this study publicly a bunch before the results were known internally. Now both are stone cold silent."

The committee sent letters to Cafepharma and both pharmaceutical firms asking for details and explanations.

"The company will cooperate with the committee," said a Merck spokesperson, and further said that "The company acted with integrity and in good faith in this clinical trial."

According to Lab Law Weekly (February 22, 2008), In the 48 hours after Merck/Schering-Plough released the preliminary results of the ENHANCE clinical trial, 82 percent of surveyed physicians responded that the results would have an impact on their prescribing decisions. Medco reported that Vytorin represented 11.7 percent of the total cholesterol medicines it dispensed through its mail-pharmacy business in early January, but the drug has now dropped to about nine percent of the prescriptions. Not surprisingly, prescriptions for the generic Zocor increased.

Several lawsuits have now been filed against Merck & Co. and Schering-Plough Corp. for "misleading" consumers into thinking that Vytorin was more effective than its generic versions, such as Zocor. So far, the states of Washington, Florida, New Jersey and New York are involved in the lawsuit and it is expected that more states will join in.

Patients believe they were intentionally misled by these companies whose main concern is profit over health. Merck and Schering-Plough have made huge profits in sales since knowing their drug was no better than a generic and much cheaper medication (and there are several on the market). And their marketing for its sale was fraudulent. Patients want the drug companies to refund all the money they spent in Vytorin, and then some.