2004 was a good year for Claudia - until Halloween night. Claudia was at a party when she noticed she wasn't feeling well. She went to hospital several days later and found out that she had suffered a heart attack. Her doctor put her on Vytorin, and she remained on it for three years, until she had a stroke. If the Vytorin was working as it was meant to, would she still have had a stroke?

Claudia would really like to know. Her heart attack occurred before she went on Vytorin, and she was put on the cholesterol lowering drug to help reduce her risk of her having another cardiovascular event. She also had two stents put in her arteries. "My main artery was 98 percent blocked," she said. Theoretically, Claudia should have been protected. Her disease was being 'managed.' 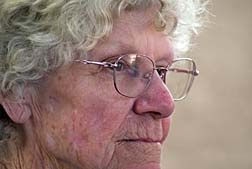 Claudia felt protected on Vytorin. Perhaps that is why she didn't realize what was happening when she had her stroke. "I woke up in the middle of the night and threw up - it was just bile because I hadn't eaten much that day," she said. "I didn't really think anything of it. Then I got a headache. I didn't think too much of that either. I thought I had probably just thrown up too hard. But in the morning when I woke up I had a massive headache in the back of my head. I thought I had a migraine - so I took some aspirin. But they didn't help. In fact, I couldn't do my job for a couple of days because the headache was so bad.

On the Friday night I was due to go out with a friend, but I was still feeling terrible. I told her I had an awful headache and had had it for several days at this point. I could barely open my eyes. I could barely see. She told me to go the hospital and get a shot for a migraine."

So I went to the hospital. They gave me a shot, and I promptly had a reaction to it. So they took a couple of tests, and when the doctor came back he said they couldn't release me - I'd just had a stroke. I couldn't believe it.

I was in the hospital for a few days while they monitored me. I remember that my speech was terrible, and my memory - especially my memory of vocabulary - little words - was awful. I had pains in my legs and arms. But the only thing I complained about was the food."

The stroke Claudia suffered has had a lasting effect on her short-term memory and consequently impacted her ability to work. Claudia is a single mother, so she needs to work. But she also needs to be away from stressful situations, given her health. In an effort to find less stressful work, Claudia is currently applying to become a property surveyor, but she doesn't know if she can successfully complete the three hour exam, because her short-term memory is so poor.

But the litany of disaster doesn't stop there. During the three years Claudia was on Vytorin, she became an insulin-dependent, or type I diabetic. And it appears she may also have liver damage, a potentially life-threatening side effect of the medication.

"I just heard that Vytorin can cause liver problems," said Claudia."My doctor told me recently that I had a fatty liver. He asked me if I drink - and I said I'm lucky if I have one a week - that's my big night out. So it can't be that. I'm worried that the Vytorin could have affected my liver as well.

Another side affect of Vytorin, one that she no longer suffers because her doctor took her off the drug after her stroke, is the inability to sleep properly. "I had terrible trouble sleeping. I would wake up after just a few hours of sleep and be wide-awake. I would often get up and cook. It really shook up my sleep pattern," she said. Lack of sleep negatively impacts a person's health.

Claudia has not yet been contacted by a lawyer, but she is very concerned about her future as a result of her recent health issues, and would like to take legal action. "Here I am taking this drug thinking I'm safe, and I'm not. My arteries are clogging up," she said. Claudia is young - in her early fifties - so she has many years left in which she can work and contribute to society. She needs to make sure they are good years, for herself and her family.

If you taken Vytorin because of the way it was marketed, please contact a [Vytorin Marketing Fraud Lawyer] who will review your case at no cost or obligation.
Request Legal Help Now