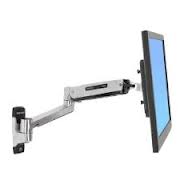 Washington, DC: About 195,000 Ergotron Interactive Wall Mounts are being recalled in the United States, 60 in Canada and 21,000 in Mexico following reports that the weld between the "VESA"style mounting plate and the mounting ring can fail, allowing the monitor or TV to fall. This poses a risk of injury to bystanders, and the potential for property damage.
The adjustable Ergotron interactive wall mount is designed for flat panel displays and televisions which allows users to reposition their display angles. The wall mounts consist of three parts including a wall mount plate for securing the system to the wall; an extendible arm that allows the user to adjust the position of their television in multiple directions and a monitor plate for securing the arm to the television.

The model number and date codes are printed on the underside of the arms of the PLAY and ITV models. The date code label for the OM80FM, OBFM120 and OBFM60 models is printed on the front surface of the wall mount bracket. For a complete list of the affected model numbers visit http://www.cpsc.gov/en/Recalls/2014/Ergotron-Recalls-Television-Wall-Mounts/#remedy

The units were sold at AAFES, h.h.Gregg, Sam' Club, Walmart and independent retailers nationwide specializing in electronic supplies and online at Amazon.com from February 2012 to January 2013 for between $50 and $400.