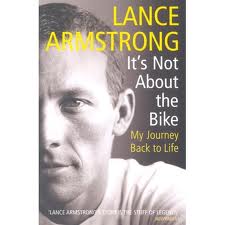 Sacramento, CA: A consumer fraud class action lawsuit has been filed against the publishers of Lance Armstrong' book "It's Not About the Bike." The lawsuit alleges the publishers sold the book as fact, when it was fiction. The lawsuit, filed this week in federal court in California, also mentions Armstrong's other book, "Every Second Counts," and accuses the cyclist and his publishers of fraud and false advertising.
The lawsuit, filed by Rob Stutzman in federal court in California, also mentions Armstrong' other book "Every Second Counts, and alleges Armstrong and his publishers are guilty of consumer fraud. Specifically, the lawsuit states "At that time, Stutzman thanked Defandant Armstrong for writing his book and told him it was very inspiring and that he recommended it to friends who were fighting cancer." Stutzman contends that had he and others similarly situated known Armstrong's accounts were lies, they would not have purchased the book, or have enjoyed it less.

"Throughout the book, Defendant Armstrong repeatedly denies that he ever used banned substances before or during his professional cycling career," the lawsuit states. The lawsuit also states that the plaintiffs purchased the book "based upon the false belief that they were true and honest works of nonfiction when, in fact, Defendants knew or should have known that these books were works of fiction."