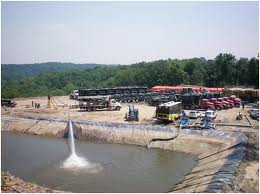 Houston, TX: Two couples in Johnson County have filed a potential class action against Sunoco , Enterprise Crude Oil, Shell Oil, and EOG Resources alleging their homes were damaged by a series of earthquakes caused by hydraulic fracking or fracking. The couples allege that at least nine earthquakes shook their homes, some so badly that it caused thousands of dollars of damage including cracking of the structure of their homes, some at least a half-inch wide.
One of the quakes "felt like a semi hit the side of our house," said plaintiff Jan Finn said. Mrs. Finn claims that particular quake was so strong her husband jumped out of bed and ran outside, expecting to find a vehicle had hit their brick home. The quake caused the side of the house dropped. The Finns claim they have paid $6,500 in repairs.

A short distance away, in Luisa Lane in Alvarado, much larger cracks allegedly appeared in Ed Specht's brick home. The cracks are allegedly so wide that he is stuffing them with insulation. However, the wall has begun to bow out and he fears it could give way. Specht said he can't afford to fix it, but gas drillers should.

State maps show that there are over a dozen wells beneath the neighborhood. Specht said he's lived in his home more than 20 years and kept the foundation watered. He claims the only thing new is the wave of earthquakes.

Some experts believe waste water injection wells, not fracking, are linked to the new phenomenon of quakes in North Texas. According to an attorney representing the Finns and Spechts, the waste wells are part of the fracking process.