On Dec-20-04 the FDA issued a warning against naproxen (sold as Aleve, Anaprox and Naprosyn) after the National Institute of Health haulted a clinical trial which found that patients taking 2 tablets a day for 3 years developed a 50% higher risk of heart attack and stroke. 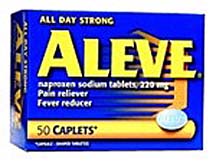 Of the 2,500 patients in the study, about 70 suffered stroke or heart attack, and 23 died. The trial studied patients in their 70s with no previous history of cardivascular problems. This is the first time such concerns have been raised about naproxen.

The FDA now recommends that Aleve not be taken for more than 10 days. Aleve is an over-the-counter medication, and not a prescription drug. Officials urge users to follow label directions carefully.

Doctors note that these medications were initially conceived for short term pain relief, and were not intended for long-term use with higher doses. The effects of long-term use had not been previously scrutinized. Aleve is manufactured by Bayer.

Aleve in the News

If you feel you qualify for damages or remedies that might be awarded in a possible Aleve class action or lawsuit, please fill in our form on the right to submit your complaint to a lawyer who will evaluate your claim at no cost or obligation.
Stay Informed
Get the latest on class action lawsuits, settlements & more! Subscribe to our free weekly newsletter.
Get our Newsletter!
Submit a New Complaint
Been wronged by a similar product or service?
Click here to send us your complaint.