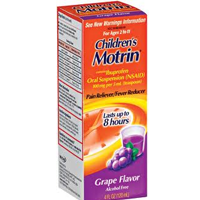 Children' Motrin has been linked to Stevens Johnson Syndrome (SJS), a potentially life-threatening allergic reaction from a medication. Ibuprofen, the active ingredient in Children's Motrin, is associated with SJS, which can be life-threatening if not treated immediately Analgesics (pain relievers), sulfa drugs and seizure drugs are the most common medicines to cause Stevens Johnson Syndrome; however, a large number of drugs can cause it, including Children' Motrin. Sadly, SJS most often occurs in young children and even babies.

When parents notice that their child is suffering from a fever, their first reaction is often to treat the child with Children's Motrin. Ibuprofen, the active ingredient in Children's Motrin, has now been linked to a risk of SJS, a potentially life-threatening allergic reaction to medication. 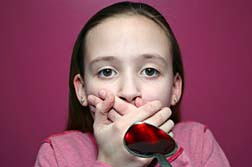 As SJS develops, the patient's skin can slough off. Patients with Stevens Johnson Syndrome, or its more severe form, known as Toxic Epidermal Necrolysis (TEN) are prone to infections, which results in a higher risk of death. Children who have survived Stevens Johnson Syndrome can suffer permanent blindness, photophobia, asthma and lung damage. They may also require repeated surgeries as they recover from their condition.

Lawsuits have been filed against McNeil Laboratories, the maker of Children's Motrin, and its parent company Johnson & Johnson, alleging the companies knew about the risk of Stevens Johnson Syndrome but failed to adequately warn the public. Meanwhile, advocacy groups have asked the FDA to require a warning label on Children's Motrin about the risk of the potentially fatal adverse reaction to the drug.

In May 2011 a Philadelphia jury determined a 13-year old girl suffered a life-threatening reaction from taking Children's Motrin brand ibuprofen when she was three-and-a-half. She was awarded $10 million.

Brianna Maya developed a rash and hives, blisters formed in her mouth, then she developed TEN, which is life-threatening. Her attorney said there was no warning on the package linking Children' Motrin to SJS and TEN. Brianna lost 84 percent of her skin, was blinded, her reproductive organs destroyed and she suffered brain damage. Her attorney said that McNeil Laboratories issued warnings for the prescription version of the drug, but did not list those warnings on Motrin packaged for over-the-counter sales.

Children's Motrin is given to children ages 2 to 11 to relieve minor aches and pains due to common colds, the flu, sore throats, headaches and toothaches. It can also be used to reduce a fever. Ibuprofen is in a class of drugs known as nonsteroidal anti-inflammatory drugs (NSAIDs), which have been linked to Stevens Johnson Syndrome.

Children as young as 3 months old have been diagnosed with Stevens Johnson Syndrome. If your child developed Stevens Johnson Syndrome after taking Children's Motrin, an experienced SJS Childrens Motrin attorney can discuss your legal options and help you file a complaint against the drug manufacturer. You may be eligible to file a lawsuit against the maker of Children's Motrin.

If a loved one has suffered from Stevens Johnson Syndrome (SJS) after taking Children's Motrin, please fill in our form on the right and your complaint will be sent to a lawyer who may evaluate your claim at no cost or obligation.
Stay Informed
Get the latest on class action lawsuits, settlements & more! Subscribe to our free weekly newsletter.
Get our Newsletter!
Submit a New Complaint
Been wronged by a similar product or service?
Click here to send us your complaint.
RELATED NEWS
More Children's Motrin SJS News