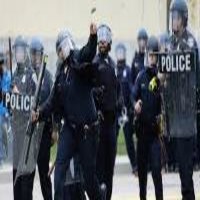 Santa Clara, CA: A police brutality and civil rights class action lawsuit has been filed by a criminal defense lawyer on behalf of himself and others arrested during the inauguration of President Trump. The protesters have been charged with felony rioting during the ceremony and are facing up to 10 years in prison and a fine of up to $25,000.
The lawsuit claims that most of those who were arrested during a sweep of some 230 people by the Metropolitan Police Department and the U.S. Park Police, were innocent bystanders who were not involved in the protest.

The class action was filed by attorney Benjamin Christopher Carraway on behalf of himself and all those arrested, which include not only protesters who had engaged in no criminal conduct, but also members of the media, attorneys, legal observers, and medics, the suit states.

According to lawsuit, around the time of Trump’s swearing in, several police officers surrounded individuals who were at or near the protest occurring near 12th & L St. The police officers kettled all of plaintiffs. Also known as containment or corralling, kettling is a police tactic used in crowd control and involves the formation of large cordons of police officers who move to contain a crowd within a limited area.

Carraway alleges that once the police defendants had kettled the plaintiffs, they indiscriminately and repeatedly used chemical irritants, attacked the individuals with batons, and threw flash-band grenades into the contained crowd.

“Mr. Carraway and the members of the class are individuals who were subjected to this outrageous conduct by the defendants for no legitimate law enforcement reason,” the lawsuit states.

“None of the plaintiffs who are members of this class destroyed or attempted to destroy property, assaulted or attempted to assault any individuals, rioted, or in any way would have appeared to the police to have been breaking the law,” the suit states.

Additionally, the lawsuit states that many who were arrested were “peacefully protesting,” including the attorney representing Carraway, who was himself wearing a green hat that identified him as a legal observer.

The lawsuit is brought against the police officers for violation of the Fourth Amendment, false arrest and excessive force. Carraway seeks to represent a Class “consisting of each person who (i)was arrested on January 20, 2017 in the group of individuals described in this Complaint; and/or (ii) had chemical irritants deployed against them and/or were struck with a baton and/or were subjected to flash-bang grenades.” He is also asking for compensatory and punitive damages in an amount to be determined at trial.

Carraway is represented by himself and Jeffrey L. Light of The Law Office of Jeffrey L. Light. The Inauguration Protest Arrests Class Action Lawsuit is Benjamin Christopher Carraway Esq. v. John Doe MPD Officers, et al., Case No. 1:17-cv-00137, in the U.S. District Court for the District of Columbia.

If you or a loved one has suffered similar damages or injuries, please fill in our form on the right and your complaint will be sent to a civil & human rights lawyer who may evaluate your claim at no cost or obligation.
Stay Informed
Get the latest on class action lawsuits, settlements & more! Subscribe to our free weekly newsletter.
Get our Newsletter!
Submit a New Complaint
Been wronged by a similar product or service?
Click here to send us your complaint.

Posted by
TDM
on March 26, 2017
OMG!!!! The poor little crybabies! EVERYONE at EVERY protest acting as a protester should be arrested!!!!!!!!!!!! Maybe going to work that day or using all that energy and time to do something positive?????? Tsk Tsk Tsk!!!!