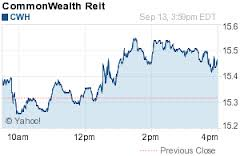 New York, NY: A securities class action has been commenced in the United States District Court for the District of Massachusetts on behalf of purchasers of CommonWealth REIT ("CommonWealth") (NYSE:CWH) common shares during the period between January 10, 2012 and August 8, 2012 (the "Class Period").

The complaint charges CommonWealth and certain of its officers and directors with violations of the Securities Exchange Act of 1934. CommonWealth is a real estate investment trust, or REIT, which primarily owns office and industrial properties located throughout the United States.

The complaint alleges that, during the Class Period, defendants issued materially false and misleading statements regarding the Company' financial performance and future prospects. Specifically, defendants misrepresented and/or failed to disclose the following adverse facts: (a) that the Company was experiencing softness in the leasing market as the number of leased office spaces, especially in the Company' suburban office segment, was below internal expectations; (b) that existing tenants were demanding and receiving significant concessions, which was further eroding the Company' rental income; and (c) as a result of the foregoing, defendants lacked a reasonable basis for their positive statements about the Company' leverage ratio, occupancy rate and dividend payout.

On August 8, 2012, the Company announced its financial results for the second quarter of 2012, the period ended June 30, 2012. Following the earnings press release, CommonWealth held a conference call with analysts and investors. During the conference call, defendant Adam D. Portnoy, the Company' President and Managing Trustee, stated that CommonWealth would likely reduce its dividend because, among other things, the Company' cash available for distribution payout ratio had increased to 108%. Moreover, the Company revealed that its occupancy rate fell to 84.5%, as of June 30, compared to 84.8% on March 31. In reaction to these announcements, the price of CommonWealth common shares fell $1.57 per share, or 9%, to close at $16.48 per share. The price of the Company' shares continued to decline over the next two trading days to $15.67 per share as the market digested this news.

On October 9, 2012, CommonWealth announced its quarterly common and preferred dividends. In that regard, defendants announced a common dividend of $0.25 per common share – a 50% reduction from the Company' previous dividend rate.

If you have suffered from financial losses, you may qualify for damages or remedies that may be awarded in a possible CommonWealth REIT securities class action lawsuit. Please fill in our form on the right to submit your complaint for a free evaluation.