GOT A CREDIT CARD RECEIPT WITH MORE THAN FIVE CARD NUMBERS ON IT?

Any credit card receipt with five or more card numbers (or the expiration date) on it may be worth $100 or more!
In 2003, the US Congress passed a federal statute that sought to protect consumers against identity theft. Statute 15 UCA 1861, part of the Fair Credit Reporting Act (FACTA) prohibits merchants from printing on any receipt five or more digits of the credit or debit card and also prohibits printing the expiration date. The statute affected many merchants as of January 1, 2005 and it affected everyone as of December 4, 2006.

Congress passed the statute to protect consumers against fraud and to make it harder to get people's credit card numbers. 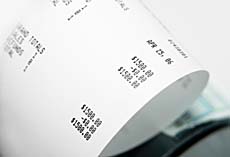 Most merchants have complied but some have not.

15 USC 1861c(g) provides for minimum damages of $100 per violation. The federal district court in Los Angeles has held, in a pending class action case against IKEA, that individuals have the right to sue under statute 15UCA 1861 to collect their $100.

Class action suits are forming against other merchants who have failed to comply.

IKEA Credit Card Consumers
A recent California court decision involving giant retailer IKEA has opened the door for wide-scale penalties that businesses may have to pay to consumers regarding what's printed on consumer credit card receipts.

The Cost of Credit Card Fraud
According to the US Department of Homeland Security, the cost of credit and charge card fraud may be as high as $500 million a year. And it's not just the credit card companies that are left holding the bag - cardholders often face economic losses, lengthy legal battles and struggles to re-establish clean credit records.

This Could Happen to You
Consumer Credit Information Protection: Not All Companies Follow the Rules
Merchants Put Consumers at Risk of Identity Theft

If you or a loved one has suffered damages in this case, please fill in our form on the right to send your complaint to a lawyer to evaluate your claim at no cost or obligation.
Stay Informed
Get the latest on class action lawsuits, settlements & more! Subscribe to our free weekly newsletter.
Get our Newsletter!
Submit a New Complaint
Been wronged by a similar product or service?
Click here to send us your complaint.
RELATED NEWS

Posted by
Sean newman
on August 23, 2018
About 2 years ago one of the three credit score websites sent me a letter saying that my credit data has been compromised by a third party company. But didn't say who the company was all they agreed on was to give me a two-week course on how I can fix my credit. About 2 years later I research a company called truthfinder supposably they have people's information and they're selling it this website once I entered and typed in my name as I was not the person trying to research the information the website then took me to a web page that says to pay a $30 fee for this person's information which was me and this website was agreeing to give personal information on my location whereabouts what my private web and text messages too my girlfriend anything that is personal . Violating Privacy Act 1996 this company had bought people's data from other companies that store without people's croissant. The website even states that if the information that they are given is used in wrongdoing that they will be Force 2 take it off but what's even more crazy about it is that they're even saying that they will give the information without the person even knowing it without my consent so I have a company that says