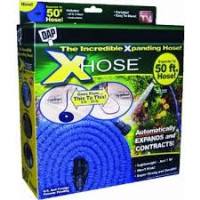 Los Angeles, CA: A defective products class action lawsuit has been filed against hose manufacturer Dap Products, Inc, alleging the the Xhose and the Xhose Pro are defective and do not perform as advertised.
According to the complaint, the hose is made out of a thin plastic internal tube with a thin cloth layer on the outside. Dap advertises the hose as providing an alternative to standard garden hoses because it is lightweight and can contract without "kinking." "Defendants' marketing and packaging states that the XHose is tough, durable, and long-lasting,"the lawsuit states. "Contrary to defendants' representations, however, the XHose is defective and predisposed to leaking, bursting, seeping and dripping due to no fault of the consumer."

Plaintiff Cynthia Finnk states in the complaint that she purchased two XHose Pros in December 2013 both of which eventually exploded during use. The company sent her a total of eight replacement hoses after the products continued to explode when in use, according to the lawsuit. The company allegedly refused to give a refund because the 90-day refund period had expired.

The plaintiffs are represented by James P. Ulwick of Kramon & Graham, P.A., and Katrina Carroll and Kyle A. Shamberg of Lite DePalma Greenberg, LLC.

Posted by
Richard Waible Sr
on August 14, 2016
I bought 2 25' xhoses on line, they didn't last a year. Both failed and are in the garbage where they belong.
Posted by
Brian Moynihan
on April 14, 2016
I bought two 25 ft hoses. After using them twice (both connected together to utilize the 50ft length) One of the hoses popped which meant that water started to rush out of the end of the hose..leaving no pressure.

I contacted the company and they sent a new hose. I have had both hoses stored in the garage in california (no weather issues..freezing, etc) and tried to use them today. Both hoses popped. Both hoses are junk. I need to go and buy a traditional hose given that these are defective and should not be sold to consumers.

I could ask for replacements, but why would I go thru the aggravation and just have them brake again. Mine hoses were balck (upgraded product) with the copper fittings...why would this company just admit they have bad product design and stop selling these products.