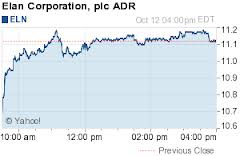 The actions allege that, during the Class Period, S.A.C. Capital Advisors, L.P. ("SAC Capital"), CR Intrinsic Investors ("CR Intrinsic"), a wholly-owned subsidiary of SAC Capital, and other related parties, including SAC Capital founder and CEO, Steven Cohen, engaged in illegal insider trading in violation of the Securities Exchange Act of 1934 by selling Elan ADRs and trading options prior to the disclosure of adverse clinical trial results for an Alzheimer's disease drug that was central to Elan's drug development efforts. Defendants received over $220 million in illegal profits and avoided significant losses by trading on material non-public information.

According to the complaints, a portfolio manager at CR Intrinsic, Mathew Martoma, received inside information from the medical doctor who chaired the drug's safety monitoring committee, Sidney Gilman. The complaints further allege that Martoma subsequently shared this information with Cohen, and over the following seven trading days, SAC Capital and Martoma liquidated their entire holdings of Elan ADRs, worth over $365 million, and acquired short positions in Elan, and eventually sold over $500 million in Elan securities before the disclosure of adverse results from the clinical trial.

On July 29, 2008, after the close of trading, the adverse results of the clinical trial were publicly disclosed. Upon this news, Elan's ADRs declined 41.8% the next day.

According to the complaint, Martoma is presently the subject of a criminal prosecution for his alleged role in the insider trading of Elan securities. Gilman has settled civil charges brought by the Securities and Exchange Commission, agreed to disgorge more than $200,000, and entered into a non-prosecution agreement with the U.S. Attorney's office for his role in the illegal scheme.

If you have suffered from financial losses, you may qualify for damages or remedies that may be awarded in a possible Elan Corporation securities class action lawsuit. Please fill in our form on the right to submit your complaint for a free evaluation.

Posted by
Betty Hicks
on April 2, 2020
I suppose this is too late, but I purchased el Corporation at $6.57. Whatever happened with this?