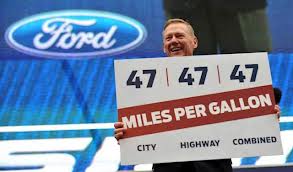 Los Angeles, CA: Ford Motor Company is facing a consumer fraud class action lawsuit filed over allegations the car manufacturer made false and misleading statements about the fuel economy numbers of its popular 2013 C-MAX Hybrid and Fusion Hybrid.
Filed by McCuneWright LLP on behalf of Richard Pitkin of California, the lawsuit claims Pitkin is getting 37 miles per gallon (mpg) from the C-MAX Hybrid he purchased in October. However, according to the mileage numbers approved by the Environmental Protection Agency, the C-MAX and Fusion Hybrid models both get 47 mpg in the city.

The lawsuit states, "In its advertising and marketing campaign for the vehicles, Ford claimed that the C-MAX Hybrid ad Fusion Hybrid achieved a class leading 47 Miles Per GallonThese materials helped Ford achieve record sales for the first two months of C-MAX Hybrid sales, outselling its rival, hybrid sales leader Toyota, but there was a problem. These ads were false."

Posted by
James McKinley
on May 25, 2022
Getting no where near the 47 MPG mileage, want to be part of the lawsuit
Posted by
Ed Miller
on September 9, 2019
I purchased a 2013 CMax because of the promised 47 MPG highway rating. I currently get about 30. I would like to be in on this case as well
Posted by
Mark Richmond
on January 29, 2018
I have been waiting for over 4 years now what is happening with this class action suit. I have lost probably over $6000 dollars in gas since buying a vehicle that get about 22% less gas millage than advertised.
Posted by
Jimmy w Dean
on January 18, 2016
I purchased a 2013 ford cmax in 3013 , because of the 47 mpg promised , my cmax has never gotten over 39 mpg. I want to be a member of the class action lawsuit.