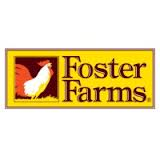 San Mateo, CA: Foster Farms is facing a food poisoning class action lawsuit brought by a woman who became seriously ill and was hospitalized with Salmonella Heidelberg, an antibiotic-resistant strain of the bug. The Foster Farms Salmonella Heidelberg outbreak has been traced to Foster Farms chickens. The plaintiff had purchased the chickens from Costco, which did recall thousands of pounds of the chickens. Foster Farms has not issued a voluntary recall.
Filed Thursday by Sally A. Claverie in San Mateo County Superior Court, the lawsuit alleges Foster Farms placed the "defense of its reputation ahead of concern for consumer safety."

According to the Centers for Disease Control, the salmonella outbreak, originally made public in early October and traced to Foster Farms chicken, has affected over 360 people in 21 states, including California.

Claverie is seeking damages for medical care and negligence for the two rotisserie cooked chickens she purchased September 11 at the El Camino Real Costco in South San Francisco. Claverie had the affected chicken in a sandwich which made her seriously ill. Within just a few hours of eating the sandwich she developed "severe stomach pain, cramps, diarrhea, coldness and shivering"and required medical care, the lawsuit states. The lawsuit also claims that as a result of the illness Claverie became physically weak, causing her to fall and fracture her neck which required surgery.

The lawsuit alleges Foster Farms knew or should have known as early as March that its poultry was contaminated with Salmonella Heidelberg. Allegedly, the company knew of other consumers hospitalized with the illness and, over the next six months, hundreds of customers in as many as 20 states became ill.

However, the lawsuit states, "Foster Farms was grossly negligent in that it took no action."The lawsuit also specifically takes aim at company President Ron Foster who was quoted that the company "couldn't find anything that was broken"with the production process and that pulling the product from the market would be "lying to the consumer"that someone else is better. The lawsuit claims this conduct was "malicious."

Posted by
Mary Dennis
on February 2, 2016
I became ill from eating chicken from Foster Farm in Farmerville, La this December 2015. Is it to late to be a part of this Lawsuit... I have pic of my parasite that I retrieve from my body. I am still being affected by this chicken I ate.