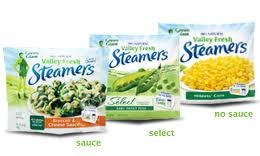 The class action lawsuit is brought on behalf of anyone who purchased Green Giant Valley Fresh Steamers containing corn or soy ingredients from October 22, 2008 through the present. It is seeking of $5 million in damages for alleged violations of California' Consumer Legal Remedies Act, Unfair Competition Law and for false advertising. Plaintiffs are represented by Benjamin Michael Lopatin of The Law Offices of Howard W. Rubinstein, PA.

Posted by
DeliviaAdkins
on April 2, 2016
I have purchased several green giant steamers such as Brussels sprouts and tereyaki veggie medleys and they have caused immediate diarrhea to the point that I'm afraid to leave the house because of the urging liquid diarrhea and stomach cramps and nausea.... If there is a class action law suit then I am entitled to it....these entrees causes diarrhea irritable bowel syndrome and extreme nausea I'm throwing the rest of them away