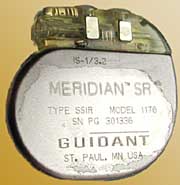 News Alert: Jun-27-06 - More models of the Guidant Pacemakers have been recalled: In July 2005, Guidant Corp. issued a worldwide recall for their heart pacemakers, warning patients and doctors that their pacemakers may need to be replaced due to possible malfunction from a faulty sealing component. Nine models that were made between 1997 and 2000 have been recalled. The models concerned are: The recall was prompted after 69 recent reports of pacemaker failures involving consumers losing consciousness due to a halt in pacing or their pacemakers increasing to a rapid pace. This malfunction may cause moisture to leak into the device and affect the electronic controls. While the FDA was evaluating consumer reports, Guidant issued a voluntary Class I recall and offered to replace the pacemakers at no charge.
According to the American Heart Association, 197,000 pacemaker procedures are performed on U.S. patients each year. These pacemakers are designed to steady the heartbeat in case of failure. Between 1990 and 2002, 2.25 million pacemakers were implanted, 8,834 of which had to be removed when they malfunctioned.

Guidant is pending acquisition by Boston Scientific for $27 million.

Guidant Pacemaker and Defibrillator Recalls: $195 Million Settlement to be Paid
Boston Scientific Corp. announced July 13 that it has agreed to pay $195 million to settle about 4,000 claims associated with defective Guidant pacemakers and defibrillators manufactured by the company it acquired last year, Guidant Corp. Since June, 2005, Guidant has issued safety warnings or recalled more than 88,000 defibrillators and about 200,000 pacemakers.

Guidant Pacemakers: Taking Lawsuits and Recalls to Heart
They've been anything but: a good guide, that is. So much so, that the company that purchased the Guidant Pacemaker franchise has changed the name of the device effective this year.

Guidant Pacemaker In the News

JUN-06-07: A class-action lawsuit was filed in Canada against Guidant in the spring of 2005 after the company recalled implantable defibrillators and pacemakers. Canadian firms are seeking around $500 million in damages. [TELEGRAM: GUIDANT]

MAY-29-07: A man has filed a lawsuit against Guidant claiming his implanted pacemaker made him dizzy, nauseous, and caused a rapid heartbeat and chest pain. The device was removed after a product recall in 2006. [RECORD: GUIDANT PACEMAKER]

OCT-03-06: Cases against Guidant mount as failures in their defibrillators and pacemakers increase. [WV RECORD: GUIDANT]

JUL-26-06: When pacemakers are recalled, what do doctors do? Replace them or monitor them? [MEDPAGE: GUIDANT PACEMAKERS]

If you or a loved one has a defective Guidant Pacemaker implant, you may qualify for damages or remedies that may be awarded in a possible class action lawsuit. Please fill in our form on the right to submit your complaint to a lawyer.
Stay Informed
Get the latest on class action lawsuits, settlements & more! Subscribe to our free weekly newsletter.
Get our Newsletter!
Submit a New Complaint
Been wronged by a similar product or service?
Click here to send us your complaint.
RELATED NEWS

Posted by
Anna May Carmel
on April 3, 2020
My husband had a Boston Scientific pacemaker and Defibrillator implanted in October of 2012
He had nothing but bad luck since it was implanted. He went into congestive heart failurre in April
of 2013, He was told in 2017 that there was a recall of his battery and he had to have it replaced in Oct of 2017. It wasn't pacing right and he was always out of breath. He went into congestive
heart failure again in October of 2019 He had 20 pound of fluid because the pacemaker wasn't
doing its job. My husband passed away on Feb 29th of this year and the defibrillator didn't shock him. I think Boston Scientific should be held accountable for my husbands death.

Posted by
Katherine kamoto
on December 31, 2019
My father was suffering since year of 2003 with a Boston scientific guidant model e110 and unfortunately he was injured by it on multiple occasions sending unapropiate shock's to his heart to no avail to this day.. his cardiologist vouched his heart was healthy, then why is he suffering to this day. I'm looking for justice please someone help my dad it's been so long with no peace
Posted by
Carol Vincent
on April 28, 2016
I have a Guidant ICD and was informed yesterday April 27, when I went for my regular device check that my device has a defect that could cause my ICD to stop at any moment. I am 100% paced and this would be fatal. I was told that It is urgent that I have the device replaced immediately. I want to know how long Boston Scientific has known about this and why was I not notified immediately. Why did I have to find out in this manner and have this stress and fear suddenly become the center of my universe. Death is inevitable, but when you're told that it could happen to you at any second, it becomes a terrifying reality.
Posted by
sue
on January 5, 2016
Hi,
My dad have a Boston Scientific pacemaker put in 5 months ago. He had his first pacemaker checked around a month after it was implanted it was reported working fine. Almost 20 days ago ( mid Dec , 2015) he had visited emergency room many times with complaints of lessened urination and swelling in his abdomen, etc. Then a week ago he was hospitalized and diagnosed with water retention in lungs and body. The hospital was not able to read the data from the pacemaker, which they have the latest tools, then they contacted the seller of the pacemaker/representative. Representative of the pacemaker (seller) came in and could not read the data from the pacemaker either. So, we have learned that the pacemaker is not working/stopped working! Now, the case is in process of the manufacturing company's evaluation for replacement of the pacemaker! Due to the faulty pacemaker, the water retention, all other complications being happened, and some more issues which are under still investigation at the hospital. My dad me and all family with my dad is suffering and trying to help him recover with the treatments. I would like to consult with a lawyer about this case. Could you please send this request to the lawyers experienced with the Boston Scientific cases happened before?