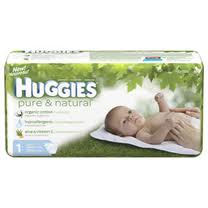 San Francisco, CA: Huggies maker, Kimberly-Clark Corp, is facing a consumer fraud class action over allegations the company promotes its disposable diapers and baby wipes as "natural"baby products, when they are not only environmentally unfriendly, but also contain dangerous toxins.
Filed by lead plaintiffs Dianna Jou and Jaynry Young, the lawsuit, entitled Jou, et al. v. Kimberly-Clark Corp., Case No. 13-cv-03075, in the U.S. District Court for the Northern District of California, alleges that Kimberly-Clark profits through misleading information about its Huggies baby wipes and diapers, by capitalizing on consumer demand for organic, environmentally friendly, natural products. The baby care products, the lawsuit alleges, are materially no different from its regular range of baby care products.

The lawsuit also contends that Huggies diapers are made with potentially harmful ingredients and that Huggies Natural Wipes contain two chemicals that have been either banned or restricted in other countries because they are considered hazardous to human health.

Specifically, the lawsuit alleges Huggies Natural Wipes are made with methylisothiazolinone, a chemical, the plaintiffs maintain, is associated with skin toxicity, immune disruption and allergic reactions. The substance, which may also act as a neurotoxin, has been restricted for use in cosmetics in Japan and Canada, according to the complaint.

"That the products are not natural, yet marketed and distinguished primarily upon this characteristic, is sufficiently deceiving to the customer,"the lawsuit claims. "The fact that evidence tends to indicate that products' contents, in current and past iterations, may be hazardous only highlights the defendant' deception." Further, the plaintiffs claim Huggies Natural Wipes also contain sodium methylparaben, a substance which allegedly acts as an endocrine disruptor, immune toxicant and allergen, and has been banned entirely in the European Union. According to the lawsuit, the U.S. Food and Drug Administration limits the use of parabens in food and drinks, and, in an Environmental Working Group report cited by the plaintiffs the substance can reportedly"strip skin of pigment."

Additionally, the plaintiffs contend that Huggies Natural Diapers are not a great deal different from standard diaper products because while they contain organic cotton, it is used on the outside of the diapers, and therefore never actually comes into contact with the baby. Jou and Young also claim that the liners of the diapers also contain several of the same unnatural, potentially harmful ingredients used in the company's standard diapers, including polypropylene and sodium polyacrylate, therefore, they are not environmentally friendly.

"Defendants' prominent representations on the packaging for the products deceptively mislead consumers into believing that Kimberly-Clark offers two natural, environmentally sound, and relatively safer product alternatives to traditional offerings,"the plaintiffs said. "While superficial differences do exist, these immaterial changes do not come close to matching a consumer' reasonable expectation resulting from the company' advertised benefits."

The plaintiffs are represented by Michael R. Reese of Reese Richman LLP.

Posted by
EJ
on March 12, 2016
It's not just one kind of huggies wipes with the hazards ingredients causing allergic REACTIONS! Read the labels please people!
Posted by
Tamesha cantrell
on February 8, 2016
My child suffered this week. Her bottom was raw red bleeding and skin peeling and falling off from these Huggies wipes. I know it came from the Huggies wipes because I recently switched to Huggies products two weeks ago. I went to the e.r. and I spoke to huggies. I didn't like how I was yelled at and treated rudely over the phone.
Posted by
Lina maldonado
on January 13, 2016
I found really Hard plastic pieces on this huggies wipes. The make really ugly injuries to my 3 mth old baby not to serious to take to the doctor but the make his skin come off what should I do?