If you have purchased an inkjet printer in the past four years, it may be unnecessarily shutting down before the ink cartridge is empty. The following companies may be engaging in unfair business practices by not allowing the consumer to use all the ink they have purchased: 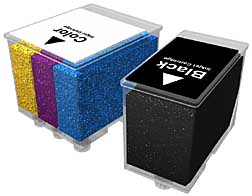 In 2002, a class action lawsuit was filed against Lexmark because they were forcing consumers to use only their ink. In April 2006, Epson settled class action lawsuits that alleged a "substantial" amount of ink remained in Epson ink jet cartridges at the time that the printer indicated the cartridge was empty. Epson agreed to give a $45 credit to consumers who purchased an Epson inkjet printer between April 8, 1999 and May 8, 2006.

Currently, other companies are trying to do the same: their ink cartridges include a computer chip that holds expiry information and monitors ink usage. Referred to in the re-manufacturing industry as a "killer chip", it prevents re-manufacturers from making compatible cartridges and forced expiry on the cartridge prevents the consumer from using a third party cartridge.

Printer companies tell the consumer in their official policies that the built-in computer/security chip "ensures high-quality printouts and prevents damage to the printer" but in reality, they just want to sell the consumer more ink.

Inkjet Cartridges in the News

If you believe that you have been taken advantage of by any printer manufacturers that cause your printer to shut down before the ink cartridge is empty, we want to hear from you.

If you have purchased an inkjet printer in the past four years, please fill in our form on the right to submit your complaint to a lawyer for a free claim evaluation.
Stay Informed
Get the latest on class action lawsuits, settlements & more! Subscribe to our free weekly newsletter.
Get our Newsletter!
Submit a New Complaint
Been wronged by a similar product or service?
Click here to send us your complaint.

Posted by
Nebraska
on June 19, 2008
It is against my principles as a person who tries to use things to their fullest to throw away the cartridges from the printer and unopened cartridges in my supply drawer.

I have lost the ability to print at home and this means that if I have a meeting in another building at work, I have to go to work early and first go to my office to print my documents there and then proceed to my meeting.

It also means that I will have to purchase a new printer, because I will not support this wasteful product by purchasing more cartridges.

I am sending this note for any chance that it can support the lawsuit against HP regarding cartridges with expiration dates.

Posted by
Indiana
on April 15, 2008
The color cartridge that came with my X2500 printer was empty. I purchased a new black 28 cartridge and now I must also purchase a color ink cartridge or an error of empty color cartridge appears or missing cartridge appears if there is no color cartridge. I only print in black and white and never print in color. I would have never purchased the Lexmark printer if I had known that I would need to spend more than the printer just to print. I checked the box and it does not warn the buyer that they will not be able to just use a replacement black cartrige.
Posted by
Ohio
on January 8, 2008
I acquired the printer in December of 2006. Until now, I have not had to replace any ink cartridges. Suddenly, in the last 3 weeks, I have had to purchase 4, including black (and had to purchase 1 other color a few weeks before that). I shook each cartridge and they all sound like they are at least 1/3 full. I have 3 children who need the printer for assignments and I am a full time graduate student as well. The printer shuts down completely and will not let me print even in only black. This is causing our family a tremendous amount of stress, as we desperately need a printer that works on demand. This is also getting expensive at $10-$20 per cartridge.
Posted by
New York
on November 15, 2007
I am an architect who makes b&w drawings and bought this printer ($2,200) in summer 2005. No large format b&w-only printer/plotters are made in this price range. The sales man assured me the color ink cartridges would not be a problem. Damages are:

- "Expired" color cartridges that stopped all printing, even though printing a test page from the machine itself shows all cartridges to be working perfectly. Replacement cost $130 for essentially useless parts.

- Missed deadlines from having wait a week for new cartridges to be ordered (not available locally).