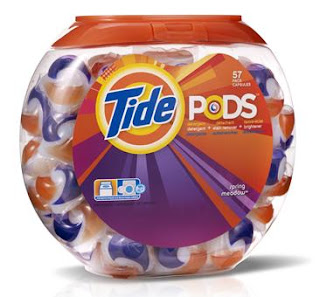 Vancouver, BC: Health Canada is warning parents to keep mini laundry detergent packs away from children after receiving dozens of reports from poison control centers that kids are mistaking them for candy and ingesting the packages. In the US, more than 250 cases have been reported since March, 2012.
To date, no deaths have been reported, but a number children required hospitalization for several days. "Consuming a detergent pod is unlikely to be fatal for a child, so parents should stay calm and call poison control if it happens, says Dr. Joseph Copeland, of B.C. Children's Hospital. Symptoms include severe abdominal pain, vomiting, and/or difficulty breathing.

At least three major North American manufacturers of cleaning products, including Procter & Gamble, make the bright-colored plastic packages. The US sent out an advisory in May after several children swallowed or bit into the detergent. In response, Cincinnati-based Procter & Gamble said it planned to create a different kind of packaging, which would comprise a new double-latch lid on tubs of its Tide Pods to deter children.

Meanwhile, Health Canada advises that laundry detergent packs should be stored in a location where they cannot be found or swallowed due to the hazards they pose to young children. As well, it advises all parents to keep the contact number of their local poison control center readily available.

Posted by
Utah
on August 20, 2012
The label on the product says to put out of reach, so i placed on top shelf of highest cabinet and my child managed to climb up while i was answering the phone. She bit it-thinking it was candy, it exploded in her mouth and eyes. We contacted poison control, rinsed, and gave her milk. We we're urged to seek immediate medical attention. Hospital had to flush her eyes with 3 saline solution bags 3000 c.c.'s.. .09%sodium...she still couldn't open her eyes...she was checked in and seen by 2 opthamologist, an E.R. doctor. She underwent PH testing, 2 different eye medications, had a fever of 100 degrees for 3 hours, she spent 29 hours in the hospital in the patient Rapid / Trauma Room. She's home today...and can't OPEN her eyes..and doctors "think" she may be able to open her eyes in a week..-maybe..my daughter is blind and helpless..and now injuring herself at home...this is affecting my employment, daycare-and jepordizing her enrollment in HeadStart Preschool this upcoming week.