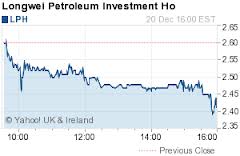 New York, NY: A securities class action lawsuit has been filed on behalf of all purchasers of common stock of Longwei Petroleum Investment Holding Limited (NYSE MKT:LPH) between May 17, 2010 and January 3, 2013, inclusive (the "Class Period"). No class has yet been certified.

The Complaint asserts violations of the federal securities laws against Longwei and certain if its officers and directors for issuing materially false and misleading financial information. The lawsuit asserts that Longwei: (a) failed to disclose a material related party investment in a tourism business involving CEO Cai; (b) concealed that CEO Cai was a minority owner of Longwei's subsidiaries; (c) Longwei's wholesale fuel sales were vastly exaggerated.

On January 3, 2013, investment analyst Geoinvesting.com published a report revealing these adverse facts and other red-flags of potential fraud, including Longwei's connection to another notorious PRC fraud involving Puda Coal, Inc.—a case where the Rosen Law Firm is currently serving as co-lead counsel for investors. Geoinvesting's public disclosure of fraud at Longwei caused Longwei's stock to fall more than 70% on January 3, 2013. Since the announcement, trading in Longwei stock has been halted.

If you have suffered from financial losses, you may qualify for damages or remedies that may be awarded in a possible Longwei Petroleum Investment Holding Limited securities class action lawsuit. Please fill in our form on the right to submit your complaint for a free evaluation.