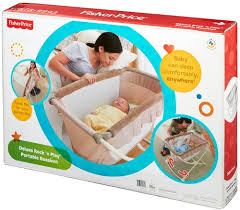 Sacramento, CA: Fisher Price and Mattel are facing a defective products class action lawsuit over allegations the Rock N Play baby seat has design flaws which results in it growing mold.
The lawsuit, entitled The Fisher-Price Rock 'N Play Mold Growth Class Action Lawsuit is Butler v. Mattel Inc., et al., Case No. 2:13-cv-00306, in the U.S. District Court for the Central District of California, alleges Mattel and Fisher-Price were aware of the Rock 'N Play design flaw since 2010. Specifically, the lawsuit claims that the baby seat design does not allow for adequate ventilation around the seat, making the product conducive to dangerous mold growth. The lawsuit, states that mold "is linked with serious respiratory illnesses and inflammatory problems in infants and recent long-term studies have suggested that infants exposed to environmental mold are nearly three times as likely to develop asthma by age seven."

The Consumer Product Safety Commission has received in excess of 600 consumer complaints alleging mold growth between the Rock 'N Play' removable cushion and plastic frame, prior to the device recall in January 2013. At the time, 16 complaints included reports of infants becoming sick from the mold. Fisher-Price faced at least on lawsuit filed by a couple who alleged their son was hospitalized for respiratory problems after being exposed to mold that they claim developed on his Rock 'N Play seat.

The Mattel and Fisher-Price marketed the Rock 'N Play class action lawsuit claims the defendants failed to warn consumers that the sleeper was prone to mold growth. The plaintiffs further claim the defendants failed to test the product for mold growth or humidity resistance prior to releasing it on the market, even though they were aware that the seat would be regularly exposed to moisture and warmth -- conditions conducive to mold growth.

According to the lawsuit, "Within seven months of the Rock 'N Play' release, concerned consumers began to call Defendants to complain that their Rock 'N Plays were 'moldy' and, in many instances, that their infants were having respiratory problems they attributed to the mold."

The lawsuit goes on to claim that tests for mold were only conducted on the product after hundreds of consumer complaints had been made detailing babies becoming ill from mold exposure. And, the lawsuit states that Mattel and Fisher-Price did not take timely action to either fix the defect or warn consumers about the risks, even though they were aware of the design defect.

While the defendants issued a recall of the Rock 'N Play on January 8, 2013, the lawsuit claims that it was inadequate because it "consists solely of a 16 page booklet of cleaning instructions downloadable from the Internet, instructing owners to inspect the product for visible mold and, if mold is seen, undertake an onerous cleaning process that will cause damage to the product."