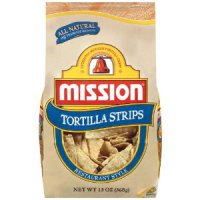 Weston, FL: A consumer fraud class action lawsuit has been filed against Gruma Corp, the manufacturers of Mission Tortilla Chips, alleging the chips contain GMOs, contrary to the advertising claims that the product is all natural.
Nichole Griffith, who filed the lawsuit entitled, Mission Tortilla Chips Class Action Lawsuit is Griffith v. Gruma Corporation, Case No. 9:13-cv-80791, in the U.S. District Court for the Southern District of Florida, alleges that Gruma deliberately misleads customers by promising that its Mission tortilla chips are natural even though they are allegedly made with genetically modified corn.

Specifically, the lawsuit states "The product is simply not 'All Natural,' and it would be unreasonable for defendant to contend otherwise."Additionally, "Genetically modified corn products contain genes and/or DNA that would not normally be in them, and that cannot be achieved through traditional crossbreeding, and are thus not natural, thereby causing the product to fail to be 'all natural.'"Griffith alleges Gruma knew, or should have known, that its products contain genetically modified ingredients.

According to her lawsuit, Griffith claims that had she been aware that GMO corn was allegedly used in the production of Mission tortilla chips, she would not have purchased the products, and especially not at the premium price. Instead, the lawsuit contends that Griffiths relied on Gruma' representations that the chips were "all natural"and she assumed that they did not contain GMO ingredients.

The consumer fraud class action alleges violations of the Florida Deceptive and Unfair Trade Practices Act and unjust enrichment. The lawsuit seeks to represent all residents of Florida who purchased Mission Tortilla Chips since August 2009 to the present. Griffith is represented by Joshua Harris Eggnatz of the Eggnatz Law Firm.