Almost one year after Katrina struck, killing over 1,800 people in the hurricane and subsequent floods, the Army Corps of Engineers has claimed responsibility for the flooding of New Orleans. 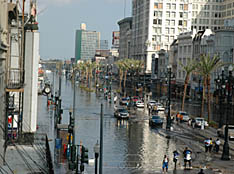 On June 1, 2006, which was also Day 1 of the new hurricane season, the agency issued a 6,000-page plus report (costing $19.7 million) of the disaster. It stated that the levees failed because they were built in a disjointed fashion with outdated methods. The report includes details on the engineering and design failures that caused the storm to overwhelm New Orleans' levees and floodwalls Aug. 29, 2005. It blamed engineers in their failure to account for the poor soil quality and the sinking of land - some sections were up to two feet lower than other parts. As well, foundation failures were blamed for four breaches in canals that run through New Orleans - the breaches caused two-thirds of the flooding in the city.

Prior to this report, investigators (experts from the University of California) from the Independent Levee Investigation Team concluded that Katrina's devastation was caused by the failure of the system, calling it unfinished and impotent.

After Hurricane Betsy flooded New Orleans in 1965, major work began on the city's hurricane protection system but over the decades funding was inadequate and many parts of the system were not completed by the time Katrina struck.

The Independent Levee Investigation Team also took jabs at the Army Corps of Engineers, calling them dysfunctional and unreliable. Their report concluded that New Orleans flooded due to human error. "It was a catastrophic failure," said the Corps chief, General Carl Strock. He also said the Corps was "deeply saddened and enormously troubled by the suffering of so many."

Damage from the storm is estimated to total up to $200 billion in Louisiana alone, making it the costliest natural disaster in US history.

On February 2, 2007, a federal judge ruled that residents whose homes were flooded during Hurricane Katrina can sue the Army Corps of Engineers over claims that the agency ignored warnings about defects in a nearby 76-mile shipping channel built in the early 1960s as a shortcut to New Orleans. The ruling is a significant decision and one of the first in a set of cases that will determine the cause of the flooding of New Orleans.

If you have suffered physical or psychological injury or financial loss as a result of flood damage caused by Hurricane Katrina, you may be entitled to compensationfor a number of reasons, from property damage to lost wages to moving costs and relocation fees.

Failed New Orleans Levees Blamed On Army Corps
A recently released report has blamed the failure of the New Orleans levees following Hurricane Katrina on the U.S. Army Corps of Engineers. The report says that decades of errors, including not knowing the elevation of New Orleans, allowed the situation in which the levees failed.

New Orleans Files $77 Billion Lawsuit for Failed Levees
The city of New Orleans has filed a $77 billion claim against the United States Army Corps of Engineers seeking compensation for losses incurred after failed levees resulted in flooding of the city.

US Government to Face Lawsuits over New Orleans Levee
The US government may face many lawsuits now that a US District Court Judge has ruled that the Army Corps of Engineers can be sued for negligence regarding flood damage caused by failure of the levees in New Orleans.

If you or a loved one has suffered physical or psychological injury or financial loss as a result of flood damage caused by Hurricane Katrina, you may qualify for damages or remedies that may be awarded in a possible class action or lawsuit. Please fill in our form on the right to submit your complaint to a lawyer for a free evaluation.
Stay Informed
Get the latest on class action lawsuits, settlements & more! Subscribe to our free weekly newsletter.
Get our Newsletter!
Submit a New Complaint
Been wronged by a similar product or service?
Click here to send us your complaint.

Posted by
tamika thomas
on October 29, 2015
It deeply saddens my heart when I go through all these articles year after year looking for an answer to whom is responsible for my mother's death in hurricane Katrina....I will never get her back or any of those moments we shared....its just sad to think that justice will never be served.....Katrina lost lives did matter! Love you mom...rip