Nobel Biocare, which manufactures titanium dental implants called Nobel Direct, is under investigation due to a risk of the implants loosening and/or the implants may be linked to significant bone loss. 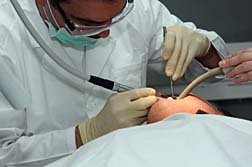 Researchers in Sweden have shown that eight percent of the implants have failed. The failure rate due to bone re-absorption may be a result of a product defect or malpractice on behalf of the implanting dentist. Since 2004, over 70,000 Nobel Direct implants have been placed in the United States.

On February 4th, 2008 the medical devices group, based in Zurich, Switzerland, and the Swedish Medical Product Agency (MPA), issued a safety note to all regulatory bodies worldwide, stating that "lower than expected marginal bone levels were observed when implants were not placed according to the intended protocol" and as a result, clarification of instructions was found necessary.

Patients with Nobel Biocare or Nobel Direct dental implants that have failed or caused bone re-absorption should contact a lawyer regarding a possible class action.

To date, there has been no litigation concerning personal injury related to these implants, but the company did face a patent infringement lawsuit. The US Supreme Court must first rule on the medical product pre-emption issue before a decision concerning litigation is decided upon.

Improved Instructions for Nobel Direct Dental Implants
In October 2007, Nobel Biocare issued a safety notice after evaluating more than 2000 Nobel Direct dental implants involved with 1183 patients. Some patients were seen as having a lower-than-marginal bone level and the company concluded that the implants were not placed according to "the intended protocol."

Nobel Direct Dental Implants Increase Profits and Lawsuits
Nobel Biocare may be reaping the profits from its Nobel Direct titanium dental implants but the "world leader in innovative evidence based dental solutions" (according to its website) might want to put some of its profits away for a rainy dayâ€"lawsuits are on the way. The company has received numerous complaints about its implants loosening and/or significant bone loss linked to the implants.

Biocare Direct Dental Implants: It's Enough to Rattle Your Teeth...
One of the primary reasons why a dental patient will opt for permanent dental implants over the more traditional, removable bridge or plate, is the annoying tendency for a plate or bridge to slip. However, for some patients of Nobel Biocare dental implant technology, it's a case of déjà vu when their implanted prosthesis loosens.

If you or a loved one has suffered damages in this defective dental implant case, you may be eligible for compensation. Please fill in our form on the right to send your complaint to a lawyer to evaluate your claim at no cost or obligation.
Stay Informed
Get the latest on class action lawsuits, settlements & more! Subscribe to our free weekly newsletter.
Get our Newsletter!
Submit a New Complaint
Been wronged by a similar product or service?
Click here to send us your complaint.
RELATED NEWS
More News

Posted by
Kathleen
on June 10, 2019
I am a former EON, Waukesha WI patient. My tooth became loose. The clinic put a filling in the hole they drilled that has now fell out. How do I know if my tooth is manufacturer by Nobel Biocare the one in this article?

Posted by
Ren
on September 24, 2018
there is a class action law suit, please contact me.. I had ALL Nobel products placed that failed. All-on-4 Maxillary and Mandible. Maxillary completely failed and then Zygomas placed and 1 failed. The other has an open connection and I have a severe chronic sinus infection. Three prosthetics were made made and now again, several replacement implants have failed.. ALL Nobel system..TRIunite,Groovy etc.. I have spent over One Hundred and Fifty Thousand dollars including transportation to fly to the DDS in another state. He has since retired and is a professor part time at a dental college. I have only three implants out of the eight which are integrated. Any advice/information would be greatly appreciated.

Posted by
Lisa
on March 18, 2017
I am a former patient of EON clinics in Waukesha, WI. I'm experiencing serious complications. How can I find out who the manufacture is that supplies their titanum?
Thank you, Lisa