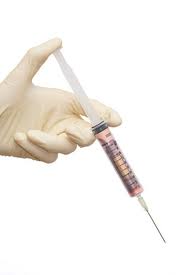 Washington, DC: The Pandemrix H1N1 swine flu vaccine made by British drugmaker GlaxoSmithKline is being linked to hundreds of reports of narcolepsy, which developed in children inoculated during the Swine Flu pandemic in 2009-2010.
Narcolepsy is an incurable sleep disorder that has a devastating effect on peoples' lives. According to a report by Reuters, a 14 year -old in Sweden developed narcolepsy after being inoculated with the Pandemrix H1N1 swine flu vaccine. She now suffers from hallucinations and nightmares, is frequently paralyzed, unable to breathe properly or call for help. During the day she can barely stay awake, and often misses school.

Reports indicate as many as 800 children in Europe have developed narcolepsy. Globally, more than 30 million people in 47 countries received the vaccine during the 2009-2010 H1N1 swine flu pandemic. The US did not approve the vaccine for use however, because it contains an adjuvant, or booster, of which American drug regulators are wary.

In Canada, a version of the adjuvanted vaccine, called Arepanrix, is approved for use and was used during the 2009-2010 pandemic. GSK is currently funding a study of the vaccine in Canada, which completes in 2014. Some experts suggest that it may not be very helpful, as the two vaccines were similar but not exactly the same.

GSK says that 795 Europeans have reported developing narcolepsy since the vaccine came into use in 2009.

Posted by
ROBBY HOOD
on February 6, 2018
After the shot in 1976 the simptoms started a few weeks later and continued my whole life and slowly got worse, i was diagnosed with the auto annune diasease ankilosing spondilitis , I am 56 yrs old now and have a totally fused spine, I can walk without assistant of cane or walker..I have always said it was the 1976 swine flu shot! The reason I think this is My mom and my aunt took me and my cousin to get the shot , I was 15 he was 17....me and him are the only ones in the family the get the diasease.....no other family member known ever had this, the Government owes US!!!!!