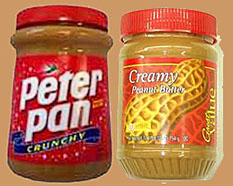 Salmonella can appear in many types of food. It can cause diarrhea, fever, dehydration, abdominal pain, nausea and vomiting.

ConAgra has shut down its Georgia plant to allow Center for Disease Control officials to investigate. The Food and Drug Administration sent investigators to review records, collect product samples, and conduct tests for salmonella.

Consumers wanting a refund should send the peanut butter lids, along with their name and address to:

Roaches and A Rat Found at ConAgra Peanut Butter Plant
Lawyers who inspected the ConAgra peanut butter plant that was linked to the recent salmonella outbreak reported finding a dead rat, rattraps and roaches at the plant. The roaches were found on raw peanuts. In addition, the attorneys found bird feathers and other things that are "consistent with salmonella."

FDA Knew of Contamination Problems at Peanut Butter Plant for Years
The Washington Post has reported that the Food and Drug Administration (FDA) knew for years about contamination at the Georgia ConAgra plant which produced peanut butter that has sickened more than 400 people across the US.

APR-26-07: Another couple has filed a lawsuit against ConAgra Foods in the wake of the peanut butter salmonella outbreak. [WKYT: PEANUT BUTTER]

APR-26-07: Lawyers who inspected the ConAgra Foods plant in Sylvester, GA, report finding a dead rat, bird feathers, roaches, and other items "consistent with salmonella contamination," according to court documents. The Sylvester plant was linked to the recent peanut butter salmonella outbreak. [
Stay Informed
Get the latest on class action lawsuits, settlements & more! Subscribe to our free weekly newsletter.
Get our Newsletter!
Submit a New Complaint
Been wronged by a similar product or service?
Click here to send us your complaint.

Posted by
Tennessee
on March 18, 2008
It happened the day after Christmas, 2006. My grandson and myself both love peanut butter and jelly sandwiches, so that's what we had for lunch, and the next day we were both sick. Vomitting, diarrhea, and fever. We started feeling somewhat better on the fourth day, but were very weak from lack of food.
Posted by
Colorado
on June 17, 2007
I had SEVERE diarrhea, abdominal cramping, headaches, and nausea for almost 5 days. Being a fulltime nursing student and single mother of two I had no other option but to keep movin on. Then about two days ago I ate some peanut butter and I became ill again. A friend of mine told me the next day about the peanut butter recall and when I checked my jars BOTH had the 2111 number on them. I am going to have the peanut butter as well as myself checked for poisioning but I had MOST of the symptoms.